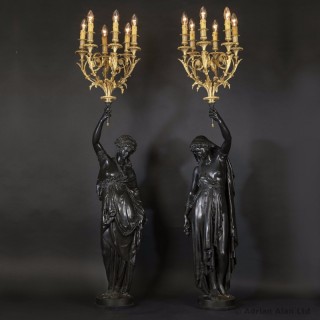 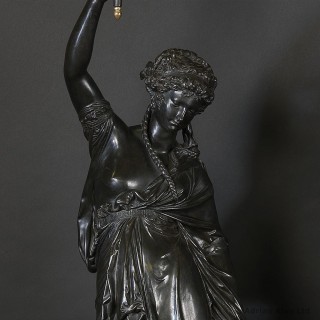 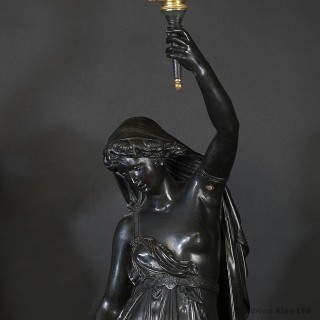 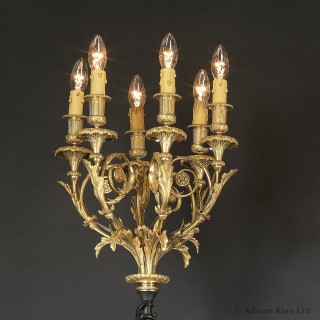 Albert Ernest Carrier-Belleuse was an important Paris sculptor (1824-1887), who signed his work ‘Carrier’. Born on the 12 June 1824, Carrier-Belleuse was trained by Fauconnier before entering the Ecole des Beaux-Arts in Paris in 1840, where he studied under David d’Angers. He later abandoned this formal training in order to develop his interest in a more decorative, romantic style – in which he showed a healthy independence. Carrier-Belleuse had his debut at the Salon in 1851 after which he worked in England until 1854 in the design shop at Minton’s porcelain works in Staffordshire, under Leon Arnoux, where many of his models were produced in ceramic.

Carrier-Belleuse continued to model many small figures and groups for production in terracotta (such as ‘La Source’) and porcelain as well as in bronze. Upon his return to Paris in 1855, he embarked on a series of important pieces that included work at the Louvre, the Hôtel de Paiva, the Opéra, the Hôtel de Ville and the Théâtre Français. As one of the most prolific and versatile sculptors of the nineteenth century, he made his reputation with the group Salve Regina, which was shown at the Salon of 1861. Eduard Lockroy described Carrier-Belleuse as a ‘machine à sculpter’ in the journal ‘L’Artiste’ in 1865. His later works ‘Bacchante’ (1863) and ‘The Messiah’ (1867) brought him medals and the Legion of Honour. In the last years of the Second Empire he executed many public commissions and was highly regarded by Napoleon III, who referred to him as ‘our Clodion’, (a comparison often made), however at the same time his success inspired jealousy among others, such as Goncourts who described him as ‘that junkman of the nineteenth century’. During the Paris Commune of 1871 he took refuge in Brussels but returned to Paris the following year where he continued to work until his death in 1887.

Carrier-Belleuse worked in every medium, both traditional and modern, and even experimented with galvanoplasty and electroplating. His combination of materials, such as porcelain for the features of his bronze statuettes, anticipated the chryselephantine figures of the turn of the century. In his later years he was appointed director of works at the Sèvres porcelain factory (1875). He employed a galaxy of rising young sculptors as assistants in his vast output of decorative bronzes and architectural sculpture, and his assistants at one time or another included Rodin and Mathurin Moreau, though his own work showed little sympathy with the modern movement which Rodin was instrumental in developing. His bronzes include many busts of historic and contemporary celebrities, classical and allegorical figures, genre groups, figures in period costume, nude statuettes, bas-reliefs and even sculptural staircases and interior decoration.