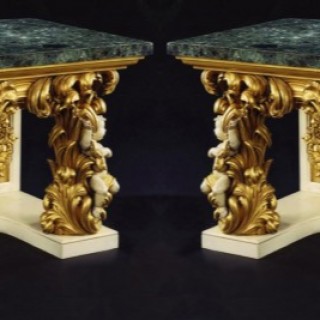 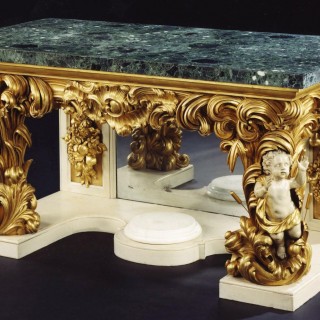 Of important size, the concave and shaped breakfront form with a circular central dais, having carved cherubs as end supports, amidst exuberantly carved foliage, decorated in gilt, and ivory paintwork. The backs with mirror plates. The platform tops are of substantial antico verde marble.

This pair of tables would appear to be those mentioned in a receipt preserved in the archives at Shrublands, for Sir William F Middleton, Bart, dated 1849 from T. Fairs, (qv) “To 2 new Boy group pier tables shaped top rails with rich palm dressings gilt in burnished gold parts painted in enamel white’ `£15 10 0.” Fairs’ address is given as 139 New Bond Street. There is rather scant record of Fairs’ business, although a Thomas Fairs, likely to be same is recorded in a London Trade Directory in the 1840s at 22 and 23 Mortimer St, Cavendish Sq. and 2 Hanover St. Regent’s St. He is listed as “painter to Her Majesty and sole proprietor of transparent ventilator.” Doubtless with a royal commission to his name he was much in demand. Certainly from the remainder of the receipt he seems to be principally a decorator. It is probable that he did not make these tables himself but supplied them in his own name, common practice at the time.

A likely attribution would be to the firm of Messrs Morant of New Bond Street. They supplied a sideboard to Lord Ellesmere as part of a large commission, exhibited at the London 1862 Exhibition, which has striking stylistic similarities to our consoles, both in form, with the concave breakfront, and the carved and decorated scheme. It is illustrated in J.B. Waring’s ‘ Masterpieces of the Industrial Art and Sculpture at the 1862 Exhibition’. Also, Morant did supply Sir William Middleton with other furnishings as bills in the archive testify. Also the firm is known to have worked closely with the architect James Barry, who carried out the 19th century alterations at Shrublands. Finally the tables bear stylistic similarities with some of the firm’s known work dating from the middle of the 19th century. In 1984 a table with very similar cherub supports, similarly white painted and parcel-gilt was sold through the dealer Tony Bunzl, which was stamped G.I.Morant, 91 Bond Street. Some of the furniture supplied for both Arundel Castle and Lancaster House also bears similarities.

George Morant founded the business in 1790. He carried out commissions for George IV and Queen Victoria. In Suffolk he undertook work for Sir William Parker at Melford Hall. The firm later became Morant, Boyd and Morant. They exhibited at the Great Exhibition in 1851 a celebrated table for the Duchess of Sutherland, similarly composition, parcel-gilt and painted. They also sent examples of their work the New York exhibition in 1853, and London 1862.