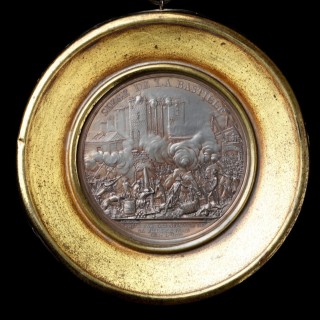 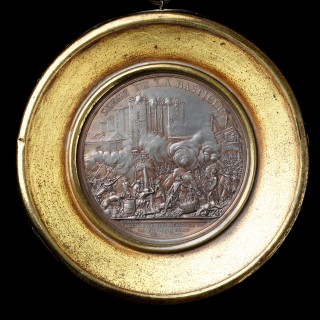 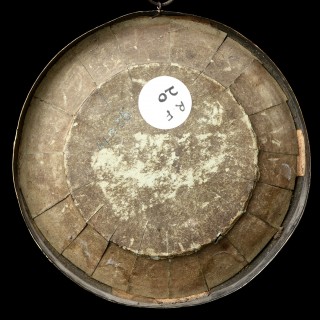 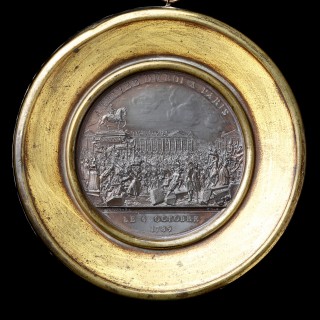 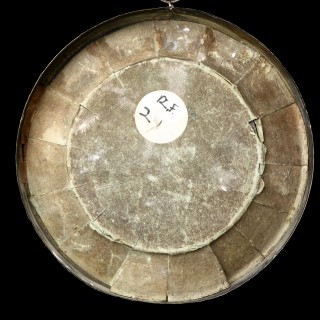 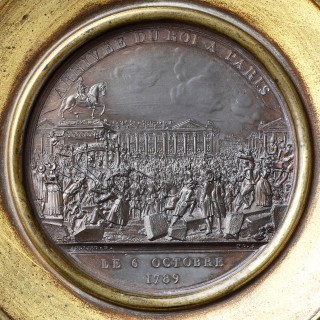 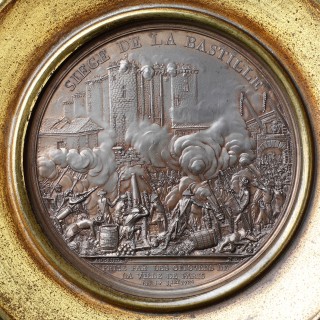 A Pair of French Revolutionary Lead Medallions Commemorating the Siege of the Bastille July 14 1789 and the Arrival of the King in Paris 6th October 1789
Marked ‘Andrieu. B’ for Bertrand Andrieu (1761 – 1822)
Framed in original gilt brass roundels
Reputedly made from the lead stripped from the roof of the Bastille
Circa 1790 – 1800

The very detailed scene showing the taking of the Bastille is entitled ‘Prise par les cetoyens de la ville de Paris Le 14 Juet 1789’ and commemorates the day thousands of people marched upon the fortress of the Bastille, after which a generation of campaign for legal reform had come to symbolise all that was hateful with an absolutist regime that allowed the King to imprison his subjects without trial and dismiss his ministers at will.
The fall of the Bastille was precipitated by news on 12th July 1789 of the King’s dismissal of Necker. On the same night weapons were seized from gunsmiths shops, crowds burned down the ring of customs barriers around the city and were joined by the armed forces garrisoned there, the Garde Française. The next day two detachments of the Garde supported by several hundred armed civilians fought their way into the building. Nearly 100 people were killed during the fighting and of the many thousands of survivors over 650 were officially recognised by the National Assembly as ‘Conquerors of the Bastille’. Most of them came from the Faubourg St Antoine to the east, not only the closest district to the Bastille, but also one of the poorest. Many were involved in the furnishing trades, they were joiners, cabinet makers, locksmiths, shoemakers, and sculptors who were the mainstay of the local economy. They occupied a special place in the public ceremonies held to mark the anniversary of 1789 on the 14th July 1790, and the date has been celebrated ever since.
After the fall of the Bastille both the King and the National Assembly begged Necker to return to the government. The King’s attempts at force had come to nothing and a financial crisis loomed. When Necker came back he hoped to establish a working partnership between his ministry and the National Assembly, but the latter was convulsed in a struggle between the ‘Anglophiles’ who still wanted a limited monarchy and the ‘patriots’. On the 5th and 6th of October, the October Days, the hopes of the moderates were dashed, the National Assembly was forced to move from Versailles to Paris with the royal family and came under the influence of the Parisian democracy. Necker struggled to restore royal authority and tried to restrain the use of paper money which, he believed, would only worsen the financial crisis. On the 2nd September 1790 utterly exhausted and bitterly defeated, he submitted his resignation and went into exile.