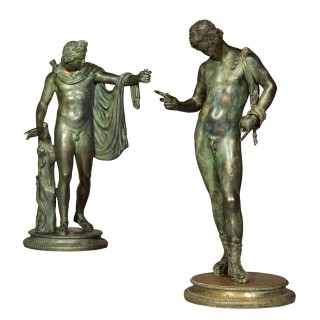 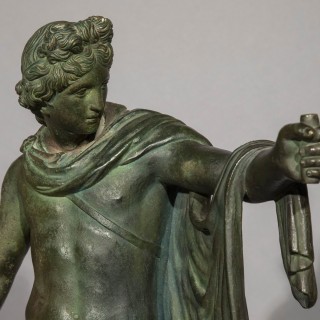 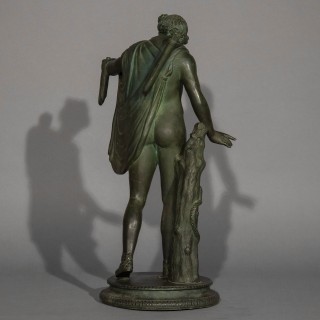 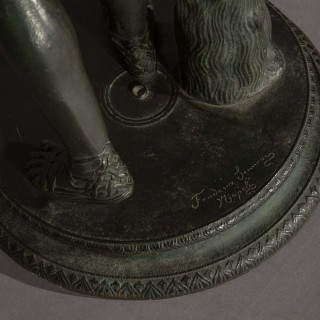 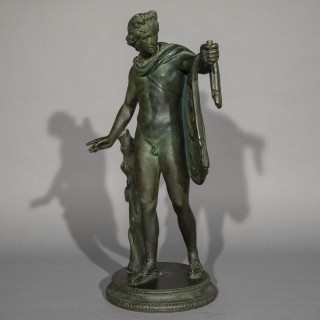 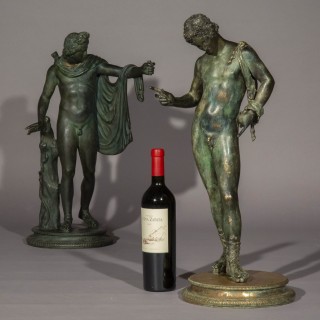 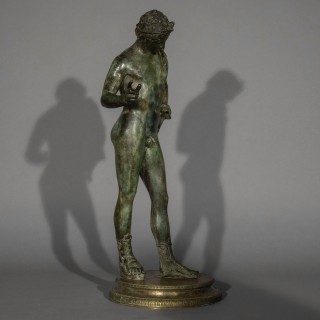 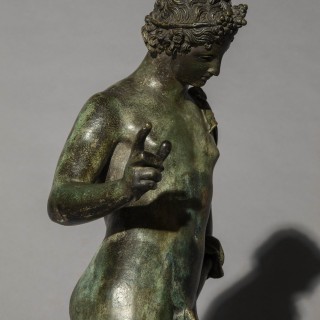 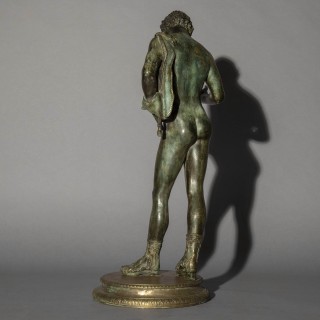 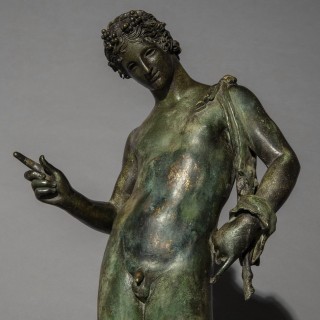 Pair of Grand Tour Bronze Figures of Apollo and Dionysus

Why we like them
Beautifully cast after the originals at the Vatican Museums and the Naples Archeological Museum,  these handsome figures not only reflect the Ancient Greek ideals of beauty, but represent a wider concept of mythological and philosophical duality. In Greek mythology, Apollo and Dionysus are both sons of Zeus. Apollo is the god of the sun, of rational thinking and order, and appeals to logic, prudence and purity and stands for reason. Apollo is usually associated with arts, music and learning. Dionysus is the god of wine and dance, of irrationality and chaos, representing passion, emotions and instincts. Just as his Roman conterpart Bacchus, Dionysus is associated with sensuality, please and abandon. The Ancient Greeks did not consider the two gods to be opposites or rivals – they were entwined by nature.
Coveted by the 19th century intellectuals and aesthetes, such exquisite objects were not mere decorations, but symbols of their owner’s classical values and refined taste.

History
The statue of Apollo Belvedere, now at the Vatican Museum, is dated to mid-2nd century AD and is considered to be a copy of an original bronze statue of 330-320 B.C. by Leochares, one of the artists who worked on the Mausoleum at Halicarnassus. The statue has always been greatly admired, but owes its fame particularly to Johann Joachim Winckelmann who considered it the sublime expression of Greek art, “of all the works of antiquity that have escaped destruction, the statue of Apollo represents the highest ideal of art”.
The statue of Dionysus (previously misidentified as Narcissus) is a copy of the original bronze, discovered in 1862 in the Vicolo del Balcon Pensile in Pompeii, now preserved in the Museo Archeologico Nazionale, Naples. Oscar Wilde, whose London home was filled with classical statuary, displayed a copy prominently on his mantelpiece.

Apollonian and Dionysian dialectic
Apollonian and Dionysian dialectic is the main theme of Friedrich Nietzsches (1844–1900) The Birth of Tragedy from the Spirit of Music (1872). He argues that it is the fusion of Dionysian and Apollonian impulses that provides the creative force in art. Apollo represents harmony, progress, clarity, logic and the principle of individuation, whereas Dionysus represents disorder, intoxication, emotion, ecstasy and unity. Nietzsche used these two forces because, for him, the world of mind and order on one side, and passion and chaos on the other, formed principles that were fundamental to the Greek culture: the Apollonian a dreaming state, full of illusions; and Dionysian a state of intoxication, representing the liberations of instinct and dissolution of boundaries. In this mold, a man appears as the satyr. He is the horror of the annihilation of the principle of individuality and at the same time someone who delights in its destruction. Both of these principles are meant to represent cognitive states that appear through art as the power of nature in man. He describes the Dionysian ‘primordial unity’ as the increase of strength, the experience of fullness and plenitude bestowed by frenzy. Frenzy acts as intoxication and is crucial for the physiological condition that enables the creation of any art. ‘In this state one enriches everything out of one’s own fullness: whatever one sees, whatever wills is seen swelled, taut, strong, overloaded with strength. A man in this state transforms things until they mirror his power—until they are reflections of his perfection. This having to transform into perfection is—art.’ (c)
Nietzsche notes that without the Apollonian, the Dionysian lacks the form and structure to make a coherent piece of art, and without the Dionysian, the Apollonian lacks the necessary vitality and passion.

The Sommer Foundry
Chiurazzi, De Angelis and Sommer where the main Neapolitan foundries that catered for the needs and tastes of the grand-tourists throughout the 19th and early 20th centuries. The latter was founded by by Giorgio Sommer, a well-known photographer and artisan of German origin. He founded his studio in Naples in 1857 and starting from the 1870s began the production of bronze and terracotta copies of ancient sculptures. Three different types of patination were available, the most common being the “Herculaneum”, “dark green and almost shiny” patina, the “Pompeii”, “green and blue not burnished”, and the “Renaissance”, “brown, shiny, burnished”. The present figures display their original ‘Pompeii’ patination.

Pair of Grand Tour Bronze Figures of Apollo and Dionysus