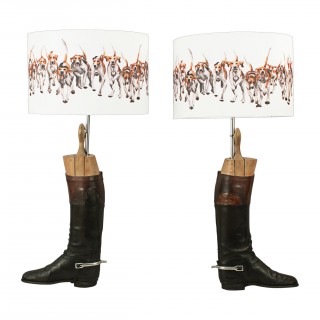 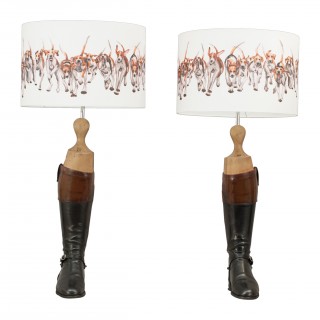 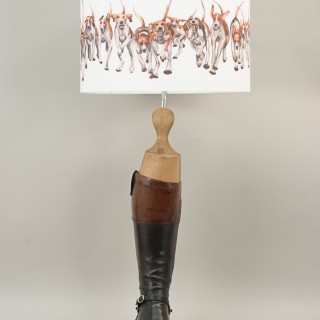 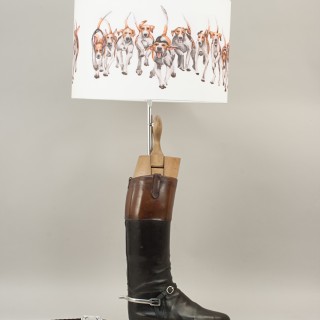 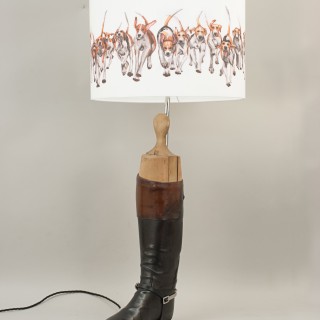 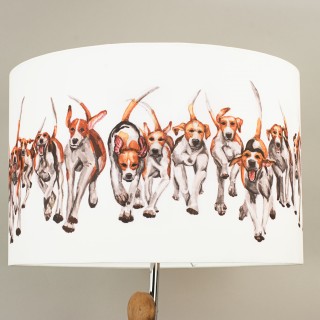 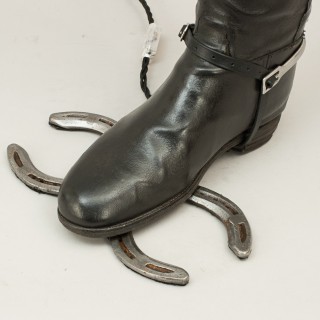 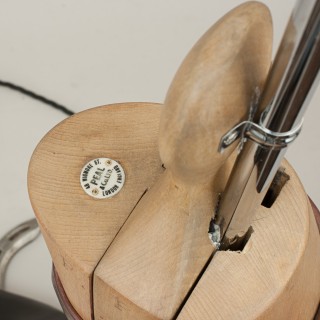 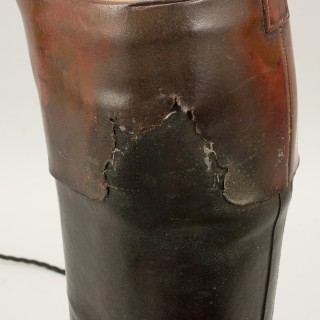 Vintage Pair of Black Fox Hunting Riding Boot Lamps.
A pair of traditional English leather Hunt or Top boots with the original beech wood trees made by Peal & Co. Ltd. 48 Wigmore Street, London, England. The black hunting boots with ‘Mahogany’ tops (tan cuff) and have been sympathetically converted into a pair of lamps. The shades are 18″ in diameter and are decorated with fox hunting hounds. To stabilize the lamps old horse shoes have been secured to the base of the boots. These boots must have been a favourite pair as they have had quite a few repairs to the leather over the years.

Hunt or Top Boots are the foot wear most people associate with hunting attire. These are typically worn when the formal hunt season opens and are worn by the Hunt Master and Hunt Staff. The boots are worn with the scarlet or red coats (also known as hunting ‘Pink’). The red coats are worn so the hunt officials can be seen from a distance. Gentlemen wearing the hunting pink also wear white breeches with the hunt boots, top hat or grey hunting cap.
Top boots with black patent leather tops or mahogany tops are also correct if one is wearing a top hat and a black coat.

The History of Peal & Co. from the National Archives

Peal and Company, boot makers produced bespoke footwear for 174 years, between 1791 and 1965. The founder of the family firm was Samuel Peal, a shoe maker from Wirksworth, Derbyshire who came to London and established himself at Stepney Green. Peal had taken out a patent for rendering clothing materials waterproof by finely brushing them with a coat of caoutchouc, Indian rubber solution. The process quickly proved its worth, Peal’s boots and shoes becoming renowned for their comfort and durability. The success of their products allowed the firm to relocate to the more prestigious West End, at 7 Frederick Place, Tottenham Court Road. Further moves took place in 1830 to 11 Duke Street, Grosvenor Square; in 1886 to 487 Oxford Street and finally in 1958 to 48 Wigmore Street.

In the course of its 174 year history, control of Peal and Company passed through six generations of the Peal family. The second incumbent, Nathaniel Peal was apprenticed in April 1808 and went on to display a selection of boots at the Great Exhibition of 1851. A century later, Peal and Co.’s products were shown at the Festival of Britain exhibition. The firm also had trade stands at the Badminton, Burghley and Hickstead horse trials, and at the Royal International Horse Show and Horse of the Year Show. Attending such prestigious events helped Peal and Company attain a reputation that was second to none.

This reputation was also earned by the salesmen who, from the 1880s onwards, travelled extensively throughout North and South American, Europe, Asia and the Far East. They succeeded in winning an enormous number of foreign orders and by the 1960s around two-thirds of the footwear produced went to export. In addition to taking measurements, the salesmen made outline drawings of every customer’s feet. These were kept in a series of Feet Books that now form the bulk of this archive collection, with 617 of the books available for consultation. The books were extensively used in the firm’s shop as well as by the travelling salesmen. A list of some of the interesting and famous customers is given at the end of this introduction.

Orders were posted or telegraphed back to the firm’s factory in Jeddo Road, Acton Vale, with delivery of the finished shoes generally taking around 6 weeks. Unfortunately, in its last few years Peal and Company had great difficulty in replacing skilled craftsmen who had retired or left the firm. This led to longer delivery times and to the eventual demise of the firm. Upon closure, the trading name was sold to Brooks Brothers of New York, who still produce a range of traditional English-style footwear marketed under the Peal banner.

Working lights, leather on boots has been repaired over the years.