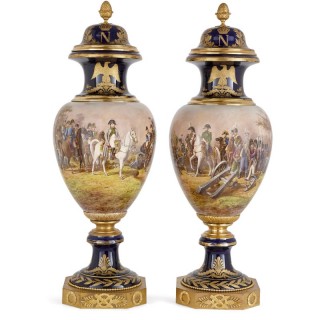 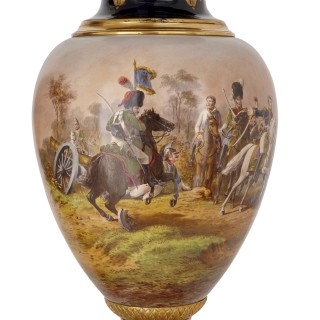 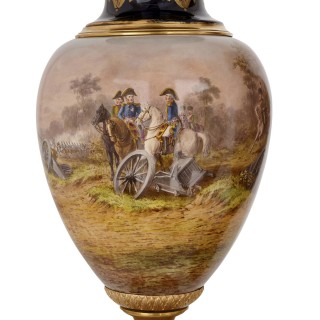 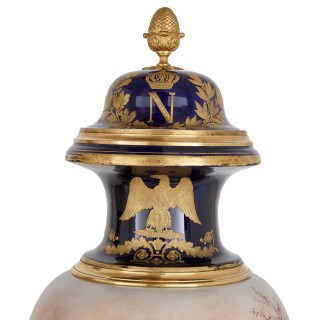 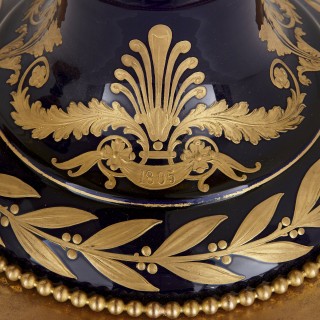 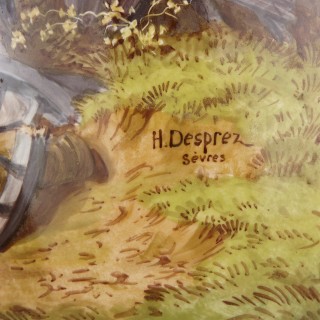 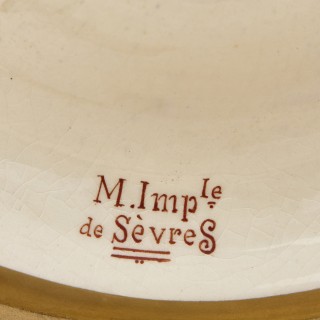 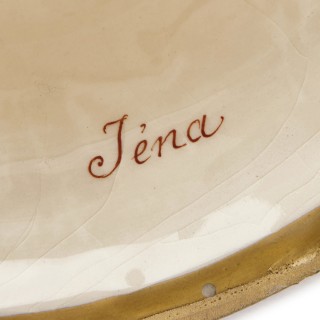 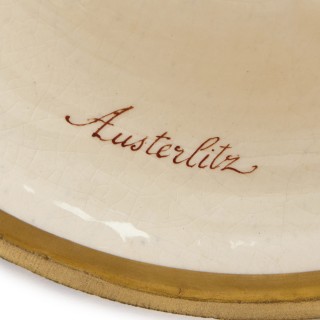 These magnificent vases are crafted from porcelain and measure an impressive 1m (39 inches) in height. Designed in the style of Sèvres porcelain, the vases have been beautifully hand-painted with battle scenes from the Napoleonic Wars.

The vases feature ovoid bodies which are topped by waisted necks. The necks are painted ‘bleu lapis’ (navy) and are finely parcel gilt with Imperial Eagles and stylised foliage. They are covered with domed ‘bleu lapis’ lids, featuring gilt crowned ‘N’s (for Napoleon I), as well as oak and laurel branches. The lids are crowned by gilt bronze (ormolu) pinecone finials.

Each vase’s body is decorated with a continuous painting of a Napoleonic battle scene. One scene portrays the Battle of Jena, when Napoleon’s Grande Armée defeated the Prussian army, led by Frederick William III. The other painting depicts the Battle of Austerlitz (or Battle of the Three Emperors) when Napoleon triumphed over Emperor Alexander I and Francis II, the Holy Roman Emperor, defeating their Russian and Austrian army. These paintings are signed ‘H Desprez/ Sevres’.

The vases stand on splayed feet which are painted ‘bleu lapis’ and parcel gilt with anthemion motifs, key dates in Napoleon’s rulership and laurel wreaths. The feet are edged with gilt bronze beading and they are set on square gilt bronze bases with canted corners. The bases are decorated with laurel wreaths, anthemions, arrow quivers and burning torches.

‘Austerlitz’ is painted onto one vase, and ‘Jena’ onto the other. Both are signed ‘M. Imp’le de Sèvres’.