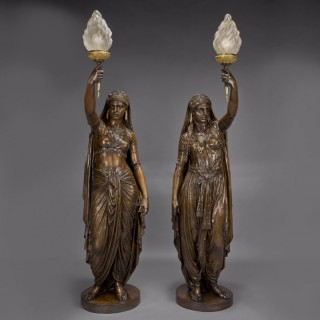 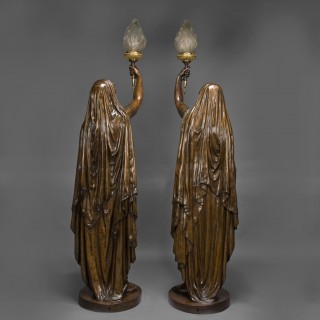 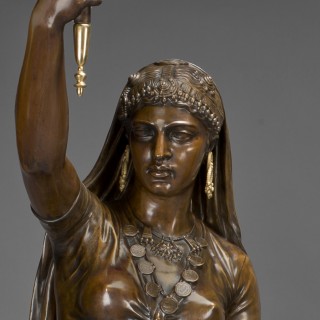 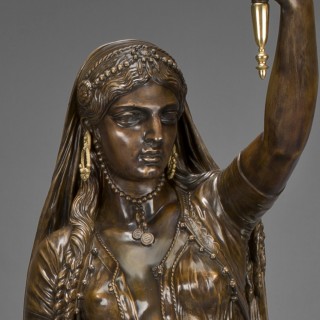 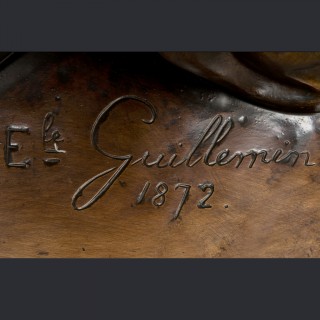 Incised ‘Ele. Guillemin 1872’ and bearing the cachet for ‘F. BARBEDIENNE.FONDEUR’.

This grand and imposing pair of figural torcheres are of exceptional quality, the figures finely cast with wonderful detail and finely patinated. Barbedienne made a number of editions of this model in different sizes, the present examples being an example of the largest and most rare. The models are listed in Ferdinand Barbedienne’s 1886 catalogue as Deux Femmes, Indienne et Persane.

Ferdinand Barbedienne (1810-1892) was the inspiration and driving force behind one of the most important French art foundries. He pioneered the use of mounts and, more commonly, bronze sculpture including figures and animals. Barbedienne produced catalogues of bronze reproductions of Greek and Roman classical sculpture and experimented with champlève and cloisonné enamels during the third quarter of the century. Barbedienne exhibited several pieces of furniture at the 1855 Paris Exhibition including an ormolu mounted oak dressing table and an ormolu mounted ebony veneered bookcase. Both pieces were executed in his favoured Renaissance revival style for furniture. Furniture with mounts signed by Barbedienne is extremely rare.

Emile Coriolan Hippolyte Guillemin (1841- 1907) was born in Paris, he studied under his father, the painter Emile Marie Guillemin, and was also a pupil of Salmson.

He made his debut at the Salon in 1870 with a pair of Roman gladiators, later winning a Honourable Mention for Sculpture in 1897.

Guillemin covered a wide range of subjects, but normally figurative (most commonly biblical figures, groups or portrait busts of his contemporaries), specialising in ethnographic works he was particularly renowned as a proponent of the Orientalist movement.