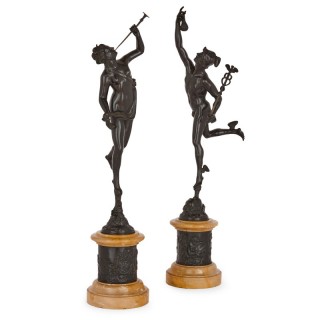 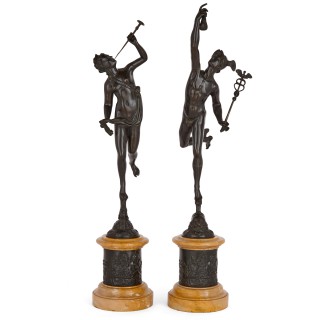 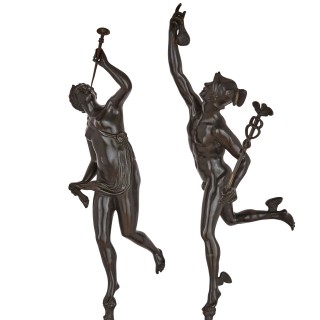 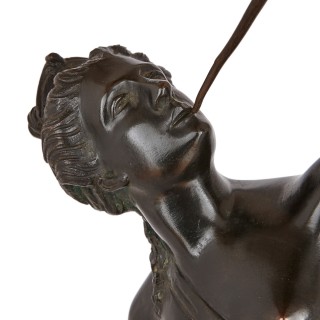 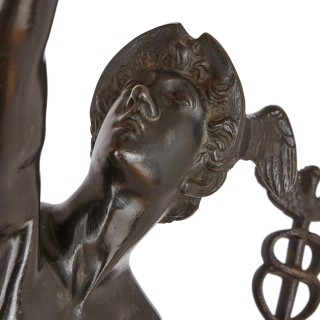 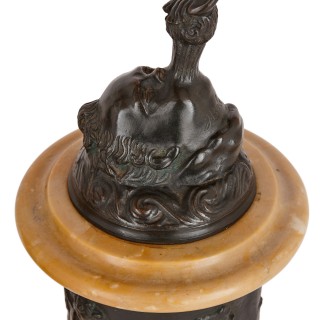 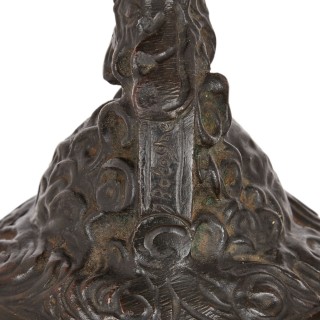 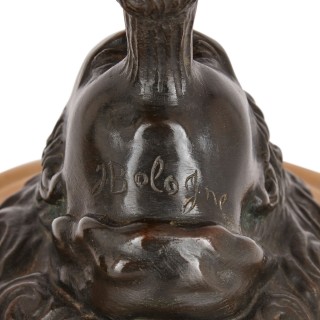 These French 19th Century sculptures depict the Roman deities, Mercury and Fortuna. In Roman religion and mythology, Mercury was responsible for delivering messages to the Olympian gods and guiding souls to the underworld. He is thus the god of communication, travellers, merchants, and commerce. Fortuna was, as her name suggests, the goddess of fortune.

The patinated bronze figures are pictured in the nude, adopting active poses. Both stand on their tiptoes on one foot — Fortuna resting on a scrolling base, and Mercury on a gust of wind, produced by Zephyrus, the god — and their other leg is flicked back. In both, one arm is raised, and the other rests at their side. Fortuna lifts a trumpet to the sky in one hand, and holds, in the other, a piece of fabric, which decorously covers her body. Mercury points to heaven with one hand, and holds his staff (a caduceus) in the other. Neptune is also pictured with his other attributes, the winged helmet and heels. The pose the figures’ adopt mean their torsos are slightly twisted in a way that accentuates the beauty of their idealised bodies.

The figures stand on cylindrical yellow marble bases, which are ringed with continuous relief panels, depicting cherubs at the helm of sailing ships, and navigating using globes. The decision to represent Neptune and Fortuna together, combined with the relief depictions of sea travel, make is possible the pair served as good luck talismans for travellers, particularly merchants or sailors.

These sculptures are based on bronze works by the 16th Century Flemish sculptor, Giambologna. Born Jean Boulogne, Giambologna spent most of his career in Italy, where he became famous for his Mannerist style marble and bronze sculptures. These two bronzes are signed ‘J. Bologne’.