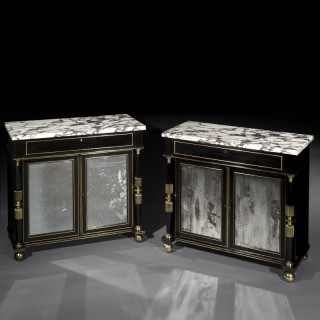 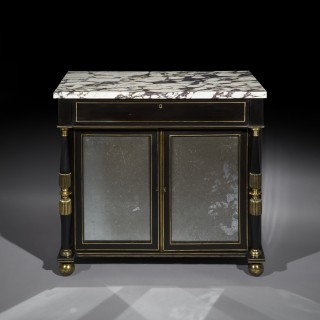 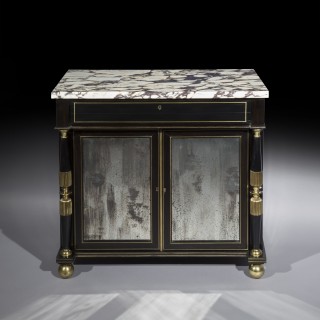 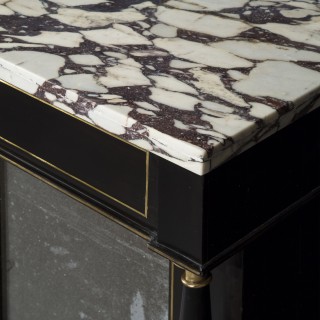 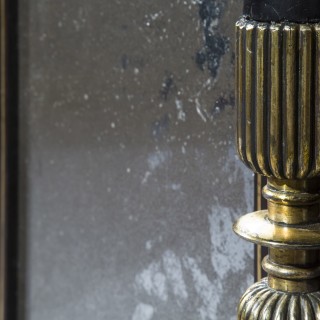 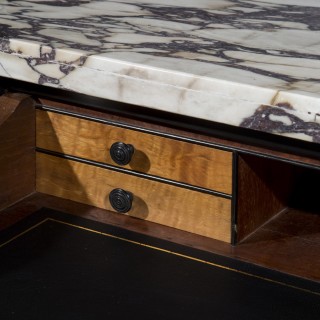 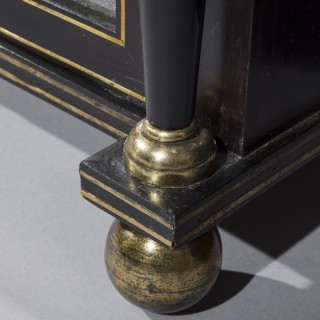 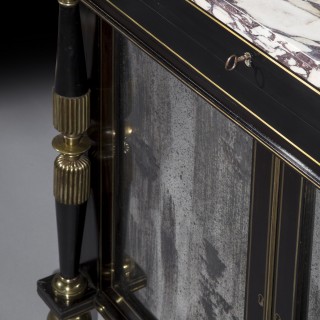 This super smart pair of cabinets features one of the most elegant designs from the early 19th century, inspired by the ancient Egyptian motifs. The brass ball-feet and ormolu mounted columns are rare and unusual features, and the beautifully oxidised mirror plates and antique breche violet marble tops add to their timeless elegance.

These marble-topped cabinets, raised on the brass ball-feet, are designed in the early 19th century ‘antique’ manner, popularised by Percier and Fontaine and relate to patterns for ‘Chiffoniers’ and ‘Drawing Room’ pier tables published in George Smith’s Collection of Designs for Household Furniture, 1808, pls. 114 and 122. Ebonised in the Egyptian taste and with the stylised palm-flowered pillars, relating to those of tripod torcheres in Thomas Hope’s Household Furniture and Interior Decoration, 1807, pl. 22.

Identical columns and ball-feet are seen on a group of pier cabinets, including a pair, sold Sotheby’s London, 29 June 2005, Lot 125, which is traditionally associated with the output of the London firm of James Newton. He labelled a suite of very similar chiffoniers sold from the collection of Maureen, Marchioness of Dufferin and Ava, Christie’s, London, 25 March 1999, lots 320-321. While stylistically these cabinets relate to the pieces ascribed to James Newton, their constructional features, such as the use of cedar linings for the secretaire fittings, is relevant to the practice of another highly esteemed London firm of the Regency period, John McLean and Son.

Upholder and cabinet maker, trained in the celebrated workshops of Lawrence Fell and William Turton – business rivals of the great Thomas Chippendale – and, in the tradition of ambitious men, married the daughter of the latter, which in part accounts for his meteoric rise to prominence; executing commissions, inter alia, for Matthew Boulton at Soho House, the Earl of Jersey at Osterley, and Sir Gilbert Heathcote; familiar with the fashions of the Regency period, he is listed as a subscriber to Thomas Sheraton’s 1803 ‘Cabinet Dictionary’; a pair of chairs with close concordances to a design of Thomas Hope’s Household Furniture’ (plate 22), and bearing his label may be viewed at the Royal Pavilion Brighton.

One small drawer has an early 19th century pencil inscription ‘Or Molu’; all drawers are pencil-numbered by the same hand.

Restored condition; replacement tops; one cabinet has 19th century mirror plates, the other one has later replacements. Minor variations in height.

Restored condition; replacement tops; one cabinet has 19th century mirror plates, the other one has later replacements. Minor variations in height.

james newton, in the style of thomas hope