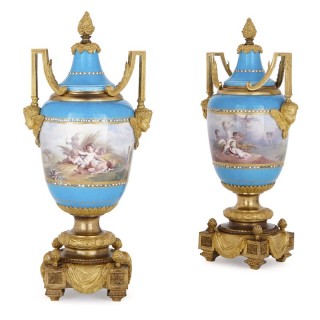 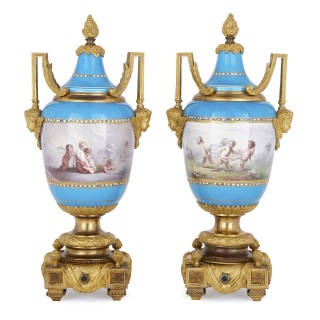 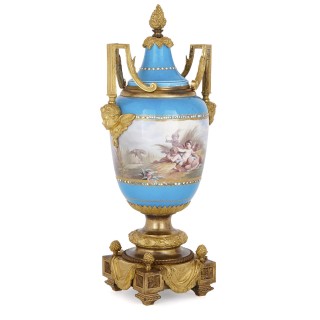 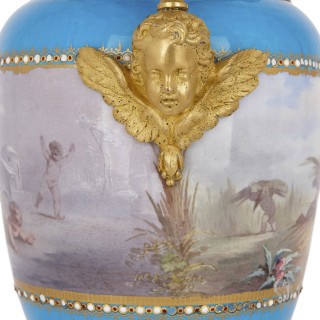 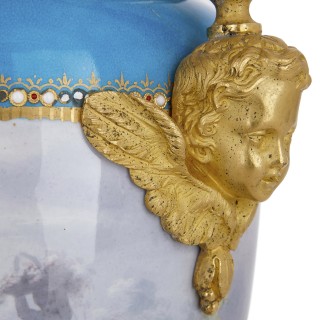 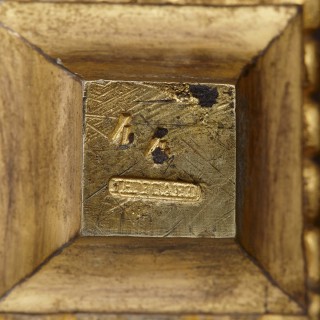 These urns are beautifully decorated in the style of 18th-Century Sèvres Manufactory porcelain. They feature porcelain ovoid bodies, topped by pointed lids. The urns are painted a turquoise, or ‘bleu celeste’, colour, and encircled by bands of parcel gilt and jewelled decoration. Their bodies feature beautiful continuous paintings of the four seasons. Winter is represented by putti huddled together on a sleigh in a snowy landscape, and autumn by cherubs reaping crops with a sickle. Spring is depicted by cherubs wearing flower wreaths and dancing while holding garlands, and summer by putti picking grapes and drinking wine.

The porcelain urns have been fitted with fine gilt bronze (ormolu) mounts, cast by Henri Picard (fl. 1831-1864). Picard was a famous French 19th-Century bronzier, who was the official supplier and gilder to Emperor Napoleon III. The urns’ lids are crowned with gilt bronze finials cast as clusters of grapes, and their bodies are mounted with geometric gilt bronze handles, which terminate in cherub heads. The urns feature gilt bronze stems, with foliate tops, laurel wreath middles, and beaded bases. These are placed on square gilt bronze plinths, which are decorated with grape finials, draped fabrics and foliate motifs. The plinths stand on beaded toupie feet, some of which are signed ‘H. Picard’.