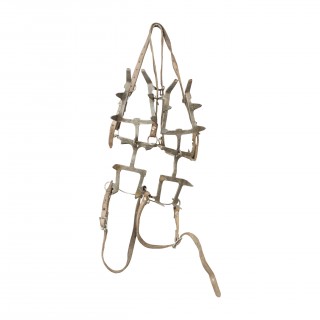 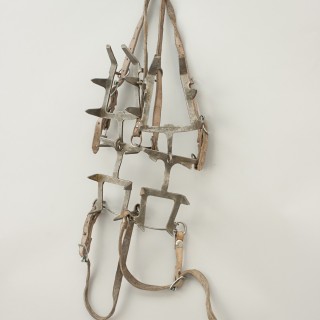 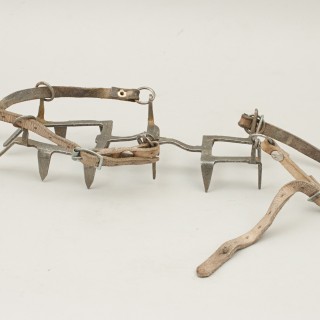 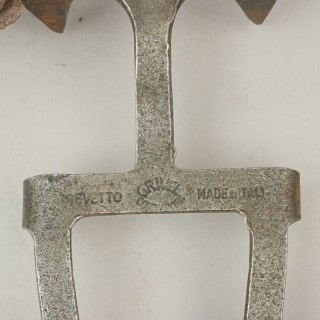 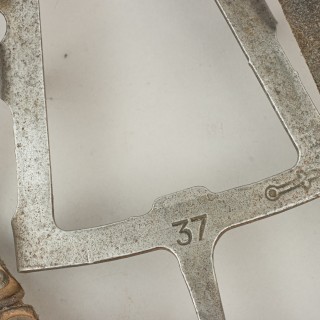 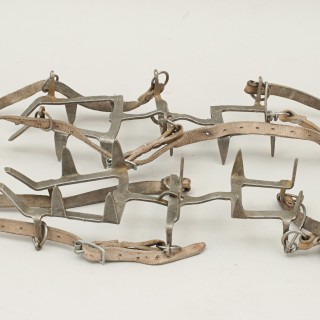 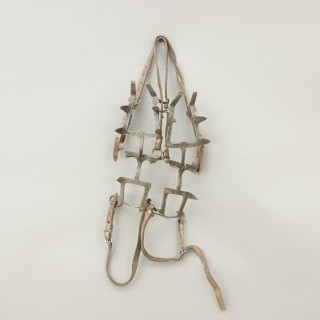 Antique Mountain Climbing Crampons.
A pair of Grivel 12 point iron crampons in the design of Oscar Eckenstein (1859 -1921). Eckenstein was a passionate climber and innovator. He developed this type of hinged crampons in 1908 and two years later, with the help of Henry Grivel of Courmayeur on the Italian side of the Mont Blanc, they became commercially available. Note the thin stamped metal construction and the angle of the front points to allow the front pointing technique on vertical ice. Each crampon has a formed steel loop at the rear that fits onto the heel of a boot, there are 6 metal rings to bind the rest of the crampon to the boot. Each crampon stamped ‘Brevetto, Grivel Courmayeur, Made in Italy’, 37.

Grivel was founded in 1818 in Courmayeur, it is the oldest manufacturer of tools for alpinism in existence. Grivel is the surname of the original founders who succeeded each other for generations.

In 1818, the Grivel family of blacksmiths started to transform their production of agricultural tools to satisfy the rather peculiar demands of a new breed of wealthy tourists who, for unfathomable reasons, wanted to climb the mountains!
In 1909 The English engineer Oscar Eckenstein asked Henry Grivel to manufacture the first modern Grivel crampons.
In 1929, Henry’s son Laurent made the brilliant invention of the two front points, allowing climbers to stand face on whilst attacking the steep ice and snow gradients. This innovation was the key to the conquest of the last unsolved route of the Alps: the North of the Eiger, 21-24th July, 1938.
In 1936, in collaboration for the first time with the Cogne steelworks, Amato Grivel, Laurent’s younger brother, using the Chromolly alloy (Nickel-Chrome-Molybdenum), created a really strong Grivel crampon, thinner and therefore lighter. They forged Grivel crampons weighing 360 grams a pair, up until then impossible. These Grivel crampons, the Super Leggero Grivel, have been used to conquer the 3 highest peaks in the world, the Everest, the K2, and the Kangchenjunga.

brevetto, grivel courmayeur, made in italy