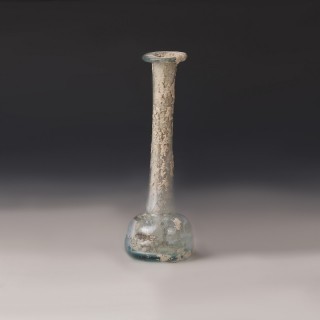 A Roman pale green glass vessel which features a flat rim, a tall long neck merging into a bulbous two step body and a flattened base, slightly concave underneath. Mother of pearl like iridescences are visible on the inside. This piece has the colour of the glass in its original form: most of the Roman glass looked like this.

Unguentaria were one of the most common objects of Roman blown glass, produced in large numbers they were items of every day use for keeping expensive perfumes and cosmetics. By the 1st century AD, the technique of glass-blowing revolutionized the art of glass-making and allowed for the production of small medicine, incense, and perfume containers in new forms. At the height of its popularity and usefulness in Rome, glass was present in nearly every aspect of daily life.

Very fine condition, intact surface with some iridescences and earthly encrustations on the surface.