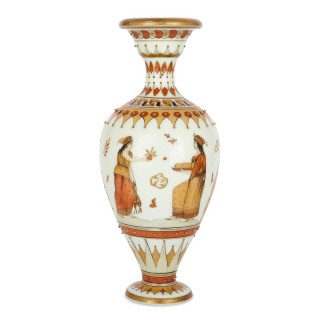 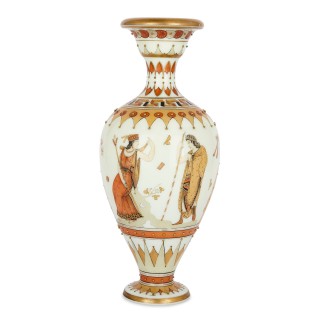 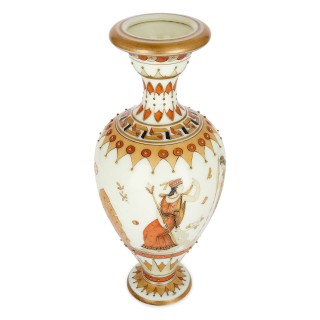 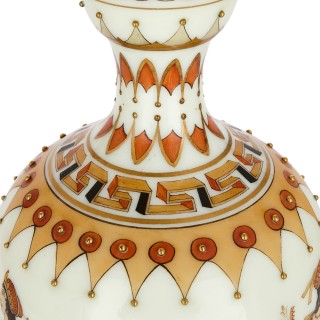 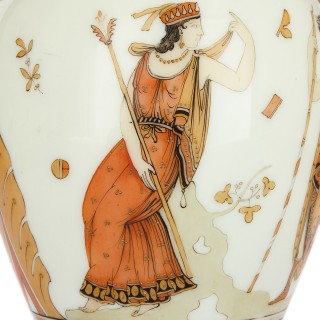 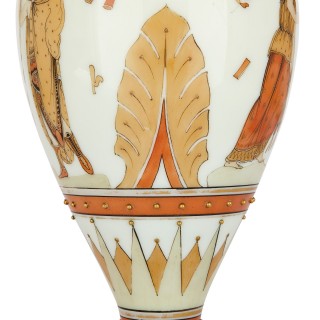 This exquisite opaque glass vase was most likely crafted by the Woodall brothers, who worked for Thomas Webb & Sons, a famous English glass company, founded in 1837. The brothers – Thomas and George Woodall – became famous for their etched and coloured glass wares, usually designed in the classical Greek revival style, which was fashionable at this time.

The vase is amphora-shaped, meaning it has a large, tapered oblong body, with a narrow, cylindrical neck. It stands on a small, circular foot, which features geometric, leaf-like orange painted and parcel gilt decoration. This stylised foliate decoration continues onto the lower part of the vase body, where it is contained within two bands of orange. The leaf forms and banding are applied with gilt beads.

Above, the vase body has been decorated with groups of figures, which are painted in the Greek revival style. On one side, there is a man and woman, who both hold staffs and turn to face one another across the space. On the other, two women approach one another face-on, with one woman holding out a vegetable to the other, the other clasping a dish full of food. It is unclear who the figures represent, perhaps ancient Greek citizens, or Olympian Gods.

The top of the vase body and neck are decorated in a similar style to the base, with repeated geometric patterns, which are painted, parcel gilt and studded with gilt beads. The vase mouth is ringed by a double band of parcel gilt.

This classical style amphora vase is a beautiful object, crafted by highly-skilled glass artisans. It will make a wonderful addition to an interior, either antique or contemporary in its style.