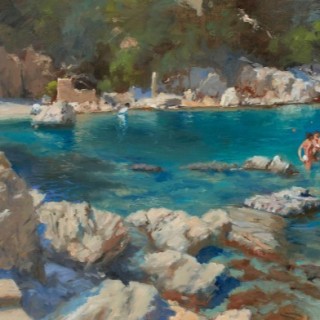 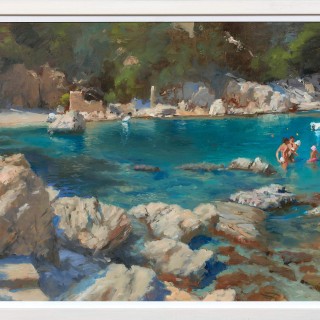 Michael Alford lives and works in London. He is known for an expressive painting style that fuses classical technique with a sharp, modern sensibility, he exhibits extensively in the United Kingdom, the United States and continental Europe. Michael’s varied body of work reflects his interest in many types of painting. He is well known for powerful cityscapes of contemporary urban centres—especially London—and for landscapes that capture diverse geographies through the eyes of a passionate traveller. His paintings of figures, clothed and nude, are sought after for their combination of fine draughtsmanship, acute observation and sense of drama. A sensitive portraitist, Michael is frequently commissioned to paint individuals and groups.

Michael’s earliest art training came from his father, a colonel in the Royal Engineers, who taught him to draw in perspective from a young age. After a stint in the Royal Marines, Michael studied Spanish and Arabic at Durham University. He travelled extensively in South America and the Middle East, keeping detailed sketchbooks to record his experiences. He later studied art at the Slade School and the Chelsea School of Art.

Travel remains and important source of inspiration for Michael’s work. Driven by a love for plein air sketching and painting from life, Michael’s recent trips have taken him to India, East Africa, the Middle East, Europe, the Caribbean and North America. He has been appointed war artist to the British Military, accompanying troops to Helmand Province in 2011 and again in 2013 and later in Iraq in 2016; his work is to be found in the permanent collection of the National Army Museum, among other institutions.

Michael has been awarded several prizes including the Green and Stone Oil Painting Prize, the Agnes Reeve Memorial Prize for best painting of London, and the Prima Luce Mural prize. Michael is a member of the Chelsea Arts Society.