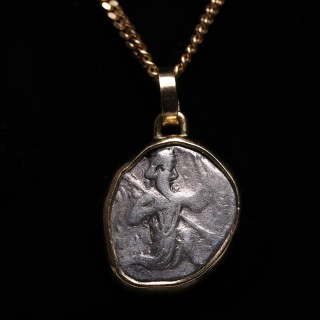 A Persian silver siglos pendant, featuring a siglos coin set in a modern 18ct gold frame, with a loop attached at the top for suspension. The frame displays a London hallmark, hand crafted by a Hatton garden jeweller. The front of the pendant features the coin’s obverse, which depicts the figure of the Great King facing right in a knielauf position, also known as kneeling-running stance. The kidaris on his head, a type of crown worn by Persian rulers in the Median and Achaemenid periods, reveals the figure’s royal status; however, Persian coinage likely showed a portrait of an idealised ruler, rather than a true portrait of the ruling king. The figure is dressed in a kandys, a long sleeved cloak worn by men in the Persian Empire, which was later adopted in Greek fashion and transformed into a garment typically worn by Athenian women. The naturalistically rendered folds seen on the drapery allow to place the coin within the type IIIb sigloi, dating to the Xerxes I – Darius II period. The king holds a long lance in his right hand, pointing to the ground, and a bow in his left, now mostly smoothen out by wear. The reverse shows a simple, irregular punch mark and an X-shaped countermark to the left.

Please be aware that the chain is for reference only, we do have chains available upon enquiry.