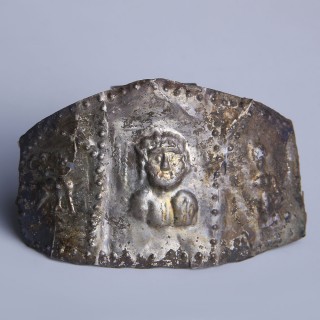 An extremely fine Ancient Phoenician diadem hammered from a thin layer of silver. The diadem features three decorated compartments, each divided by a series of repousse dots. The two laterals compartments feature respectively the depiction of a draped standing female figure and what looks like to be a combat scene between an animal and a male figure, while the central compartment displays a male figure portrayed demi-bust. All the figures are rendered in repousse technique. The central figure is portrayed frontally and bare chested, with facial and anatomical features emphasised, and with a stylised wavy coiffure. The three scenes might be part of one larger narrative, relating to the Greek myth of Theseus and the Minotaur, with the central figure being a portrait of the Greek hero Theseus, and the lateral scenes, respectively the representation of Theseus against the Minotaur and princess Ariadne.

Date: Circa 6th- 4th Century BC

Condition: Fine, some signs of erosion and ageing.