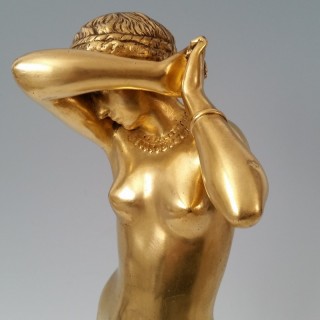 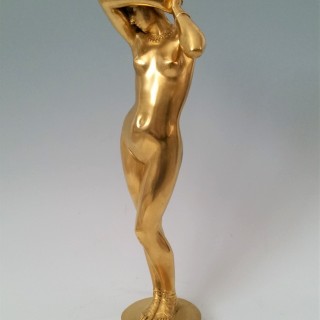 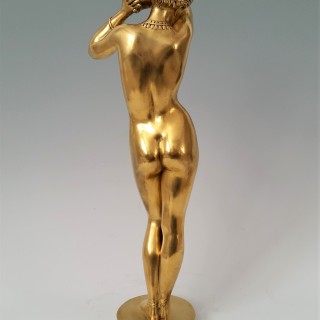 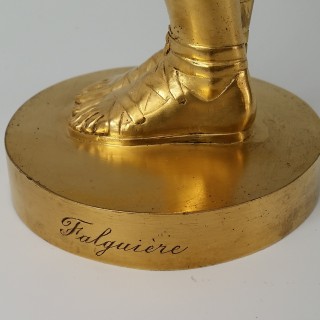 A rare example of this subject of this size in gilt bronze.

This work is based on a painting by Gerome exhibited at the Paris Salon in 1861. Gerome’s brother-in-law Goupli was an art dealer and founder, he commissioned Falguiere, a renowned sculptor in his own right, to make a sculptural representation of the main subject of the painting, ‘Phryne before the Areopagus’. This was cast in bronze and sold in various sizes, mostly with patinated finishes .

Jean Alexandre Joseph Falguière (known as Alexandre Falguière), French sculptor and painter. He was a student of François Jouffroy in Paris at the Ecole de Beaux Arts, then spent the period 1860 to 1867 in Rome.

He first exhibited at the Salon in 1857 with ‘The Child Theseu’s’ and in 1859 and two years later won the Prix de Rome with ‘The Wounded Mezance’.

In 1864 whilst in Rome he produced the sculpture ‘Victory in the Cockfight’ , this won him first prize at the Paris Salon. This was a turning point in his career and his sculpture took on a more realist tone. He secured many public commissions including the ‘Triumph of the Republic’ on the Arc de Triumph.

He was regarded as the successor to Jean-Baptiste Carpeaux and the first realist of nineteenth-century French sculpture. His restrained classical, and in most cases female mythological figures – the Diana’s, nymphs, and bacchantes – made him extremely popular.

As well as large public sculptures he sculpted many smaller genre and allegorical works.