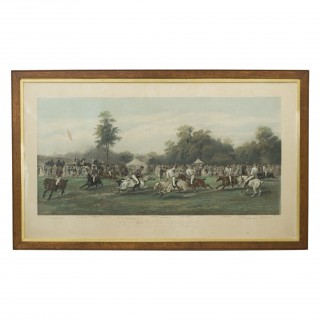 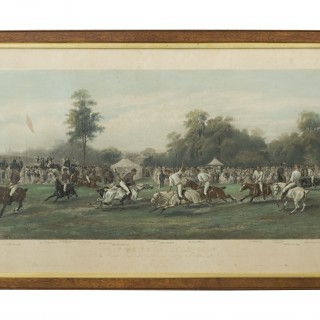 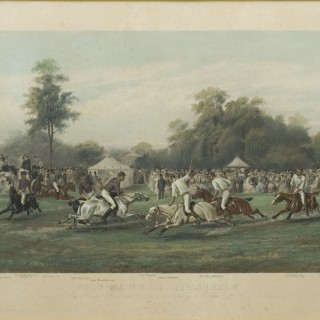 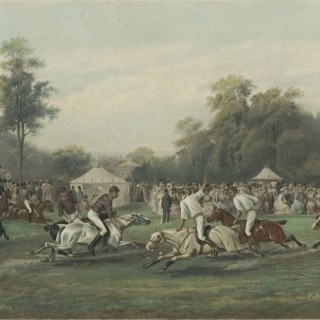 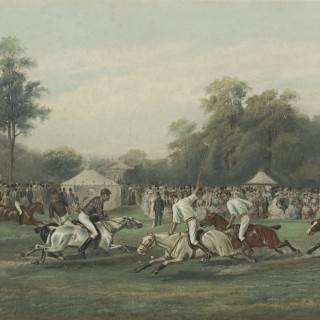 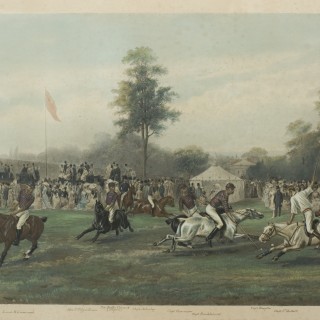 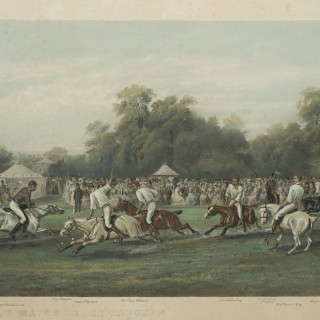 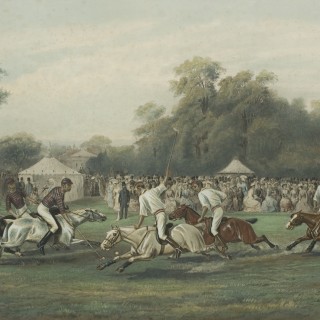 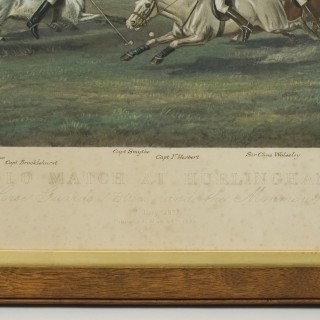 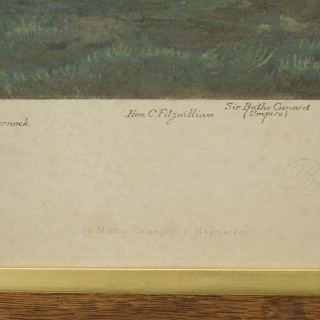 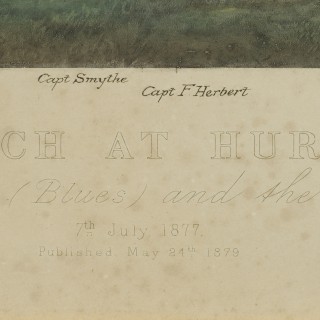 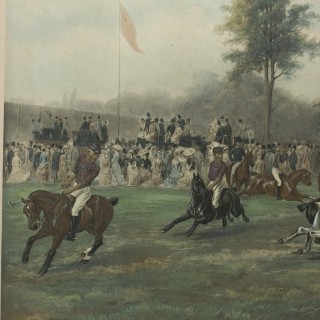 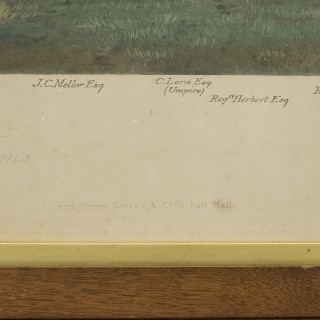 Polo Lithograph, Polo Match at Hurlingham Between the Horse Guards (Blues) and the Monmouthshire Teams

Hurlingham Polo Picture, 1877 Polo Match Between the Horse Guards and the Monmouthshire Teams.
A vintage hand-colored photogravure after the original painting by George Earl, A Polo Match At Hurlingham. The full title for this print is “Polo Match at Hurlingham Between the Horse Guards (Blues) and the Monmouthshire Teams, 7th July 1877”. Published May 24th 1897 by Martin Colnaghi, 11 Haymarket and Henry Graves & Co. 6 Pall Mall. Painted by George Earl and engraved by Goupil & Co. The names of the players and umpires are in the bottom margin under each person so they are easily recognised. The names are from left to right: Lord Kilmarnock, Hon. C. Fitzwilliam, Sir Bathe Cunard (Umpire), Capt. Atherley, Capt. Gascoigne, Capt. Brocklehurst, Capt. Smythe, Capt. F. Herbert, J.C. Mellor Esq., C. Lord Esq. (Umpire), RegD. Herbert Esq. and Hugh Owen Esq.
To go with the polo picture is a framed hand written note that reads:

The Monmouthshire Polo Club. agst: the Royal House Guards.
The first Champion Cup, presented by the Hurlingham Club was competed for in 1877. seven teams competed, viz. Hurlingham Club, International Club, United Service Club, Tyros, Staffordshire Club, Royal Horse Guards, and the Monmouthshire Club. After playing off the draws, Monmouthshire and the Tyros were left in to play the final. The result being that neither side had taken a goal after an extra half hour’s play, so the match was declared drawn.
After this the Royal Horse Guards were not at all satisfied with the result. Their contention was not at all unreasonable as they were only beaten by a single goal in their game with the Tyros and they drove a ball through the posts towards the end of the game, but it was given against them by the Umpire as one of the players made the last hit about two yards from the goal when off side.
The above Match was therefore made, and the two teams were the same as competed for the Champion Cup except that Sir Charles Wolseley played instead of Mr E Curre who acted as Umpire.
After the first few minutes play, it soon became apparent that Monmouthshire were much the strongest side, and they eventually won by four goals to one.
All the players sat for their portraits and all the ponies except one (Captain Herbert’s) were painted from life by Mr George Earl R.A.

George Earl (1824-1908) was a painter, primarily of sporting dogs and other animals. He was the father of Maud Earl (a very competent artist in her own right) Percy Earl, and the brother of Thomas Earl. He lived at Banstead, Surrey and had a studio in Newman Street, London, which he shared with his brother.
George was a keen sportsman and this is reflected in his work and reputation as a dog painter. He was an early member of The Kennel Club. Although chiefly remembered as a canine artist due to his success depicting them, of the nineteen paintings Earl exhibited at the Royal Academy between 1857 and 1883 only two were of dogs. The titles of some of his sporting works include “Polo Match at Hurlingham Between the Horse Guards (Blues) and the Monmouthshire Teams, 7th July 1877”, “Deer Stalkers Returning” and “A Grouse Drive on Bowes Moor, Yorkshire”.

Great image in original frame. The print with some foxing, frame needs so attention

Polo Lithograph, Polo Match at Hurlingham Between the Horse Guards (Blues) and the Monmouthshire Teams