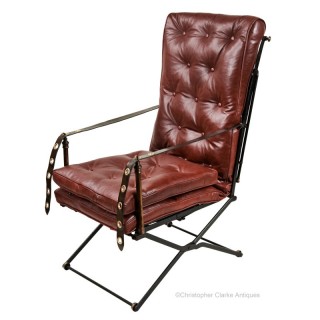 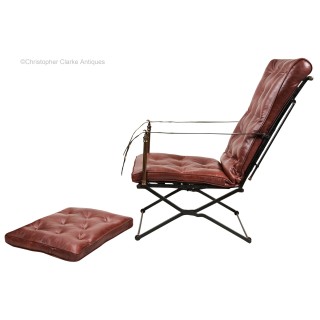 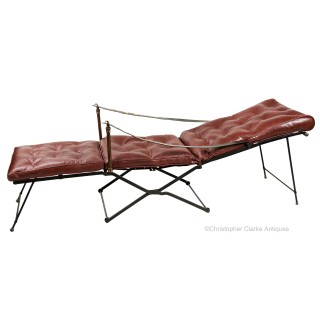 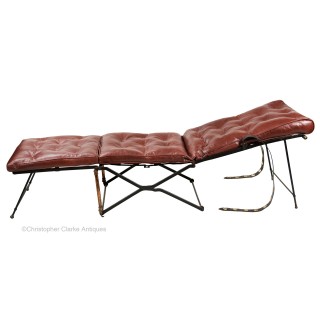 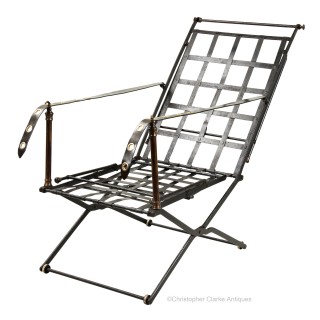 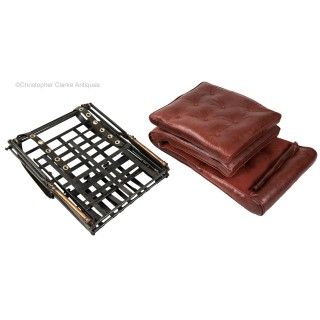 The design of this chair follows that of the wooden Douro Chair made by a number of campaign furniture makers but it has the addition of a foot rest and legs for the back. These allow the chair to have the dual purpose of both chair and narrow bed. The replaced leather arm straps have 7 eyelets to allow for a variety of positions and the chair can be used with or without the foot rest, which folds flat against the seat. When not using the foot rest, its cushion is sized so it can also be used on the seat. When not using the back’s legs, they are held flat against the back by an iron twist catch. The chair has brass upright arm posts with a hook for fixing the arm straps. These posts are hinged to fall with the hooks fixing under the front leg’s stretcher when not in use. In doing so they give the appearance of a brass front leg. Brass is also used for the feet to the legs and for the castors.

The Chair Bed folds flat on its x-frame legs, with the cushions removed. When set up, they are shaped to hold their position rather than over extend like many x-frame legs. We have found catalogue entries for similar campaign chairs by both J.W. & T. Allen in 1855 and the A&N CSL in 1883. Both were sold with a packing case that formed a table. There is no maker’s mark to this chair and it’s likely that a number of London campaign furniture makers sold similar versions. Iron chairs, although heavier, were marketed in the mid 19th century as being resistant to vermin and so stronger.

The leather upholstery to the chair has been replaced but made to the same design as the original with extra padding for the head. This is a comfortable chair with the added bonus that it can be extended to 76 inches in length. Mid 19th Century.
Size as a chair is given.

SImilar examples in both the Army & Navy CSL and J.W. Allen catalogues of the late 19th century.