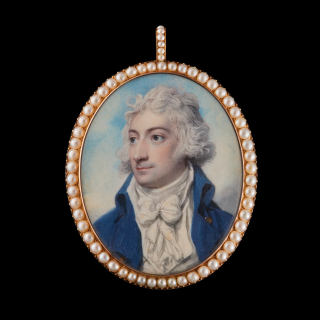 This strong and dynamic portrait, housed in the original pearl-bordered frame, is typical of Cosway’s portraits of the early 1790s. At this date, Cosway alighted on a particular pose which gave his sitters a sense of movement, where the subject has their eyes averted, the light blue sky background suggesting airy space. The resultant success of this captivating and vibrant portrait also reflects Cosway’s wide range of influences through his own collecting and artistic connections. Other examples of this can be seen in the art museum in Cincinnati (a Mr C Bradshaw, circa 1790, MMH5N4), portraits of George, Prince of Wales and indeed in his own self portrait drawing, now in the National Portrait Gallery, London (NPG 304). The present work is particularly well preserved by its original red leather travelling case, which has protected it from the light.

If we compare the male fashions in this miniature to those we saw mid-century we can see the beginnings of a slightly more streamlined and simplified silhouette. The emphasis from the 1790s into the early decades of the nineteenth century was on the neck. Finely-fitted garments were made fashionable by the likes of Beau Brummel – in the circle of the fashion-loving ‘Prince of Pleasure’ (the future George IV). Coats were cut with extremely high collars and waistcoats had lost their sleeves – and length – but gained stiff collars too.

The most important weapon in a dandy’s armoury was his fine linen. Beau Brummel recommended country washing and frequent changes of linen throughout the day. The swathes of linen at the neck were difficult to perfect and visitors were admitted into Brummel’s household to watch (and learn) as the great man perfected his appearance. One visitor bemused by the armfuls of crumpled linen being carried from the chamber was reportedly informed by the valet ‘those sir, are our failures’.

This gentleman with his extravagantly tousled hair or wig is still wearing hair powder. This was beginning to be frowned upon for its cost and the wastefulness of using wheat flour for decoration and not sustenance. Those who persisted in feeding their pride through wearing hair powder were taxed on its use from the late 1780s. In 1795 (to help defray the costs of war with France) a licence had to be obtained, and as the licence cost a guinea, those who sported hair powder would scornfully be called ‘guinea pigs’.

The present miniature was painted at the height of Cosway’s fame, when he lived for many years in Schomberg House in Pall Mall close to Carlton House, and not far from the court at St James’s. His relationship with his most important patron, George, Prince of Wales was, in many ways, the gateway to Cosway’s successful career as artist and ambitions as courtier. His recent biographer, Stephen Lloyd, describes him as “undoubtedly the most important, influential, and fashionable portrait miniaturist and draughtsman active during the last two decades of the eighteenth century and the beginning of the nineteenth.” ﻿

This artwork has been registered by Philip Mould and Company as qualifying as exempt from the ivory act. Please contact [email protected] if you have any further queries.﻿