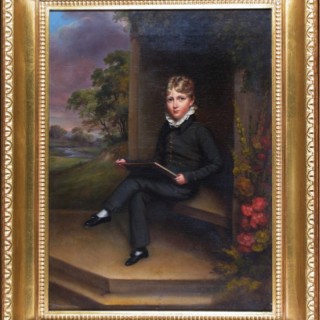 Portrait of a Boy holding a Sketching Board

PORTRAIT OF A BOY HOLDING A SKETCHING BOARD circa 1820

Portrait painter and miniaturist who lived in Exeter.
He studied under Sir Thomas Lawrence and worked in London and Paris from 1835-44. achieving considerable success. His work attracted the attention of the Duc de Berri, who became his patron, and that of Louis XVIII who awarded him a decoration. In addition to his artistic talents, Bennett was also an accomplished musician and his musical compositions became popular in Paris and Naples. He eventually returned to Exeter in 1844. Bennett exhibited works at the Royal Academy from 1812-16.
Works in public collections: Victoria & Albert Museum, British Museum; Ulster Museum

Portrait of a Boy holding a Sketching Board