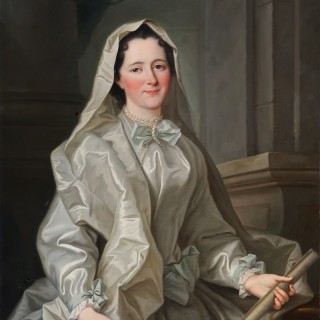 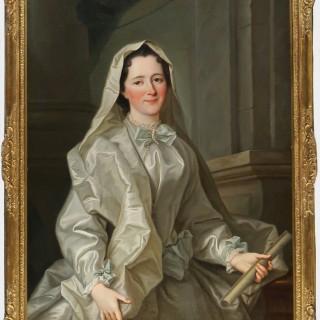 Portrait of a Lady

Herman Van Der Mijn was born Amsterdam in 1684.
He began as a flower painter, took to history and portrait at Antwerp and Dusseldorf before coming to settle in London circa 1721.
He developed a good portrait practice in England.
His work has a neat, slightly metallic style to the drapery with meticulous accessories.
Herman’s children all became painters George, Robert, Cornelia, Frans, Gerard and Andreas and it is most likely they all assisted him at some time in his practice.
He painted pictures for the Royal Family circa 1727 and his most ambitious works date from early 1730s, the largest being of ‘Viscount Chetwynd and his family’.
It is recorded that he returned to Holland during 1736 and 1737, but Herman died in London in November 1741.

This most unusual portrait depicts a confident and serene looking young woman with a hooded coat covering her head and holding a document, the full significance of this is something of a mystery.

Portrait of a Lady