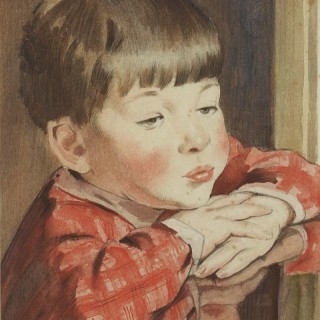 A painter and a draughtsman known for figures and portraits, Bernard Fleetwood-Walker RA was born in Birmingham in 1893. His father William Walker was the co-inventor of the Walker-Wilkins battery, and his mother Electra Amelia (née) Varley, the granddaughter of the 19th century watercolourist Cornelius Varley. Beginning his career as a silver and goldsmith, he went on to study painting at the Birmingham School of Arts and Crafts, then in London and Paris.

During World War I, Fleetwood-Walker continued to make work, despite being wounded and gassed whilst serving in France as a sniper in the Artists Rifles.

Postwar, he taught art in Aston and left in 1929 to teach at Birmingham School of Arts and Crafts. He exhibited regularly at the Royal Academy from 1925, had a major solo show at the Ruskin Gallery, Birmingham, and won a silver medal at the Paris Salon. During the 1950s he taught at the Royal Academy schools, becoming Assistant Keeper under Henry Rushbury and being elected both an Associate of the Royal Academy and then a full member in 1956. Fleetwood-Walker died in 1965.