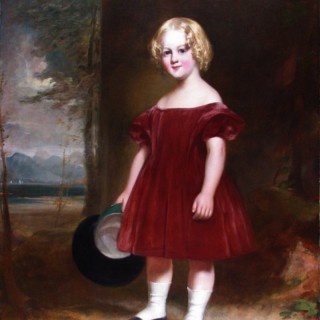 Portrait of a Young Boy

Daniel Macnee was born in Fintry, Stirlingshire, and he attended lessons in Glasgow under John Knox where he met Horatio MacCulloch and W L. Leitch. He first started to paint snuff boxes but shortly moved to Edinburgh to work for W.H. Lizars, the Edinburgh engraver. He also attended classes at the Trustees’ Academy and soon discovered that his real talents lay in portraiture. In 1832 Macnee returned to Glasgow and built up a portrait practice first using chalks and then extending to oils. His heads are always very well handled and strongly lit in contrast to the rich colour clothing and soft backgrounds.
He exhibited 100 works at the Royal Academy from 1832 – 1881 and
328 paintings at the Royal Scottish Academy. Macnee also painted many presentation portraits.
After the death of Watson Gordon in 1864 Macnee became the leading portraitist of the day, although his best work had probably been done before 1860. On the death of Sir George Harvey in 1876 Macnee was elected President of the Royal Scottish Academy and his tenure was very successful. He died in Edinburgh on 17th January 1882.

Portrait of a Young Boy