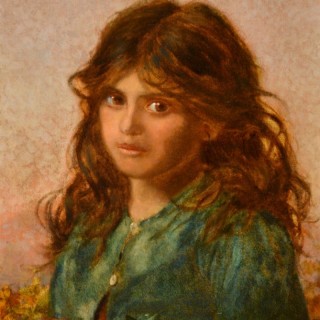 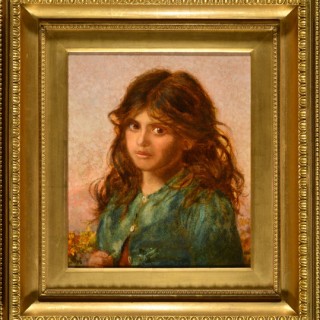 Portrait of a Young Girl

Sophie Anderson was born in Paris in 1823 daughter of Charles Antoine Colomb Gengembre, a French architect and engineer. She studied portraiture under Charles de Steuben circa 1843 and began her career as a lithographer and painter of portraits. After the outbreak of the 1848 Revolution all the family left for America settling in Cincinnati. There she established herself as a successful portrait painter and contributed illustrations to Henry Howe’s Historical Collection of the Great West 1851. The family then moved to Manchester, near Pittsburgh where Sophie married the English artist Walter Anderson, they then moved to London in 1854.
Sophie’s work was widely exhibited at venues including the Royal Academy (28), British Institution (3), Society of British Artists (14) Royal Hibernian Academy (2) National Gallery of Design, New York and Grosvenor Gallery from 1855 to 1896.
She specialized in genre paintings of children and women, typically in rural settings.
In 1858 they returned to Pennsylvania and Sophie exhibited at the Pittsburgh Artist’s Association in 1859 and 1860. The latter year she and her husband had work shown at the National Academy of Design. Around 1863 they returned to England and settled in London again.
In 1871due to her ill health they moved to the Isle of Capri, where they lived, painted and entertained society in a house with a large garden, called Villa Castello. Capri was an artist colony at that time, its residents included Frederic Leighton, Walter McLaren, John Singer Sargent, Edouard Alexandre Sain, and Jean Benner.
They once again returned to England in 1894 and settled in Wood Lane Cottage in Falmouth, Cornwall. Sophie continued to exhibit her work in London.
Her husband Walter died on 11 January 1903 and Sophie died in London on 30 August 1912 (not 1903).
Works Represented: Forbes Magazine Collection, New York
Bibl: Portrait Painters – Brian Stuart & Mervyn

Her painting titled, No Walk Today sold at Sotheby’s, London, in November 2008 for more than £1 million, which was a world record for one of her paintings.

Portrait of a Young Girl