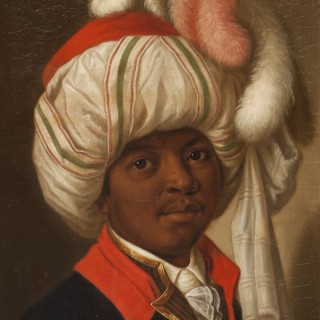 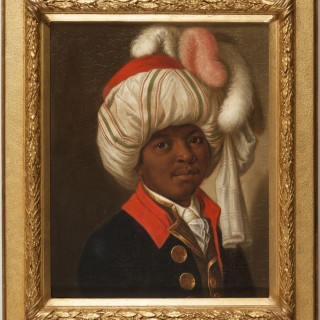 PORTRAIT OF A YOUNG MAN WEARING A TURBAN

This young man’s livery is probably that of an exotic servant; he is wearing a fine shirt, braided waistcoat and dark jacket with red collar and very large gold buttons giving the appearance of a fanciful military costume. His turban is particularly exotic, trimmed as it is with feathers. During the eighteenth century Napoleon Bonaparte became fascinated by the Mameluks who were the brave, extremely skilled elite military forces in Egypt and although they were no match for French firepower, their dedication and courage impressed him greatly. Napoleon not only owned a Mamluk bodyguard, Roustam, he also trained his own Mamluk squadron. Not surprisingly this lead to a fashion for extravagantly dressed servants and this undoubtedly represents one such particularly favoured slave.

PORTRAIT OF A YOUNG MAN WEARING A TURBAN