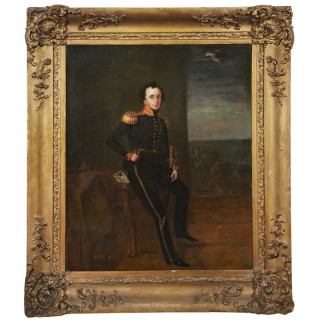 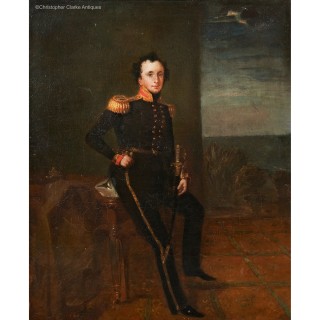 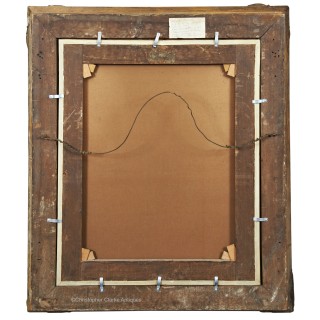 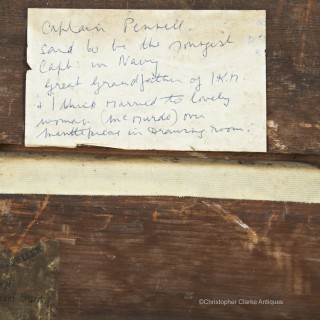 An oil on canvas portrait of Captain Follett Walrond Pennell in naval uniform.

The painting has been relined and is in a gilt frame. The back of the picture has a note fixed to it with the family legend ‘Captain Pennell, said to be the youngest Capt: in Navy. Great Grandfather of I.K.N. I think married to lovely woman (McMurdo) over mantlepiece in Drawing room’.

Follett was born in 1804, the son of William Pennell, His Majesty’s Consul General at Rio de Janeiro. He joined HMS Impregnable as a midshipman at the age of 14 moving from ship to ship stationed in the Mediterranean and West Indies, as he gained experience. He was promoted to Lieutenant when he joined the Pyramus in 1824. In 1826 he took command of HMS Fly on the East India station and in 1828 his commission as Captain was confirmed. He was paid off whilst with HMS Talbot in 1837 and this was the last time he was on active service on board ship. This is likely connected to his marriage to Catherine Anna M’Murdo a year later. Pennell did stay in the Navy though and the London Gazette lists his promotion to Vice Admiral on the 12th of September 1865. He died in 1876.

The full-length portrait shows Captain Pennell resting against a table with a reeded leg. The artist has concentrated on the sitter and the background lacks detail but the sea is shown. Circa 1835.
Frame Size is given.