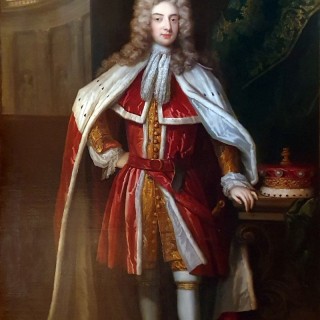 Thomas Murray was a portrait painter born in 1663 possibly in Scotland. He studied under one of the de Critz family, then with John Riley and was practicing on his own in the 1680’s. He often used props and settings in the manner of Closterman in his paintings and his later paintings were influenced by Kneller.
Murray established a successful painting practice and invested his money wisely buying many properties. He Died a wealthy man worth £40,000 in London
on 1st June 1735.
He left his money to his nephew, with instructions to erect a monument to his memory in Westminster Abbey, provided it did not cost too much. His nephew took him at his word and decided that the monument was ‘too expensive’.

Edward Ward was born in 1683 to William Ward, the third son of Edward Ward, Baron Dudley and Ward and Frances Dilke of Maxstoke Castle. He was baptized on
20 December 1683. William had been the heir apparent of the two baronies but had predeceased his father, dying in 1692. Edward was educated at Rugby School, entering on 11 July 1695.
Edward married Diana Howard, the daughter of Thomas Howard, Teller of the Exchequer on 9 April 1703. He died of smallpox in Whitehall on 28 March 1704 and was buried at Himley, Staffordshire. He was succeeded in the baronies by his son, also called Edward, who was born after his father’s death.