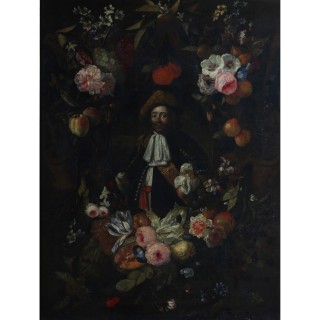 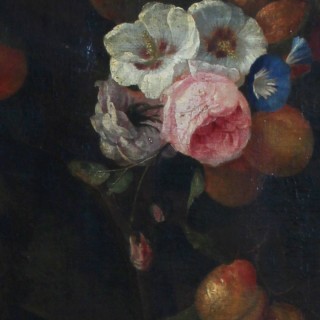 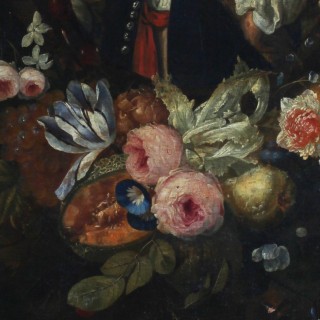 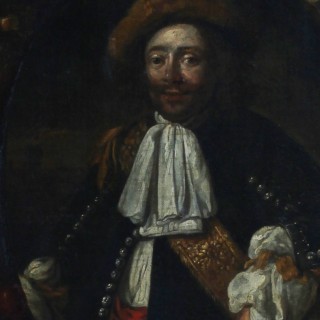 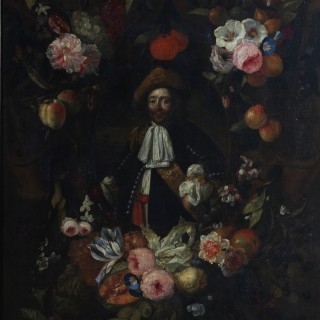 “Oragnie Boven!”, was a song sorely missed at the World Cup terraces as The Netherlands were not present . It is an old battle cry for the House of Orange that came about in their Golden age, the 17th Century. These words are proudly emblazoned on the reverse of this work from that period, but there are elements of the painting that we were initially very puzzled by. What was the original subject inside the cartouche of flowers that was so shocking it had to be physically cut out and who is the sitter who seems so jolly?

At the time there were great tensions around Europe relating to the Catholic and Protestant nations. The Dutch and Spanish did not have good relations especially. Without being certain it is probable that the initial subject within the cartouche exhibited Catholic iconography. In protest, this was cut out and inset with our gentleman. On close inspection, ships become apparent behind the figure so perhaps he was a seafaring gentleman, but who?

It happened by chance that a former Dutch colleague came to view this picture. Recognising the connection to the House of Orange and the identifiable sashes and details of his uniform that can be seen in other portraits of the sitter, she informs us that he is “Michiel de Ruyter..the Grandfather!”.

Conveniently forgotten in this country, Michiel de Ruyter was the architect of perhaps the most embarrassing episode in British naval history. In 1667 we were in conflict with the Dutch (the 2nd Anglo-Dutch War) . In a daring attack, the Dutch fleet, under the charge de Vice Admiral Michiel Adriaenszoon de Ruyter, entered the Medway and bombarded and captured Sheerness. They then proceeded past Gravesend and to Chatham, capturing many ships including the flagship of Charles II, The HMS Royal Charles (formerly the flagship of Oliver Cromwell, The Naseby). The English were so humiliated by The Battle of Medway that they vowed never to have under-strength naval defences again.

De Ruyter remains the most famous and admired figure in Dutch Naval history and would have been the perfect addition to the formerly Catholic cartouche. “Oragnie Boven!”

The portrait has been inserted into the still life at some point in the 17th Century. There is a corresponding line visible where the oval canvas joins the still life. Both canvas’s have been backed on to the lining as a result.