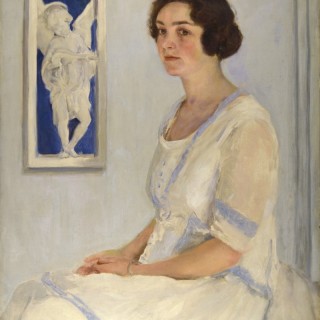 Leonard was born on the 11 October 1891, son of John Haire Fuller.
He was educated at Dulwich College and went on to become a painter of portraits, figures, still life and landscapes.
He studied at the Clapham School of Art and the Royal Academy, London and was the national silver and bronze medallist 1912 -1913.
Leonard won a painting scholarship at the British Institute in 1913.
During WW1 from 1914 to 1918 Leonard served in the machine gun Corps and returned home after surviving many battles.
From 1922 to1932 he was an art teacher at St. Johns Wood Art School and from 1926 to 1938 was an assistant art teacher at Dulwich College.
Fuller found time to exhibit his work in Paris from 1927 at the Salon des Artistes, Francais, where he received a silver medal.
During his time at the Royal Academy he met the artist Marjorie Mostyn (1893 -1979), daughter of the artist Tom Mostyn and they married. Marjorie was a painter of portraits, interior and flower scenes.
Fuller is recorded living in Sutton, Surrey in 1919 and 1933, London in 1920 and Cheam, Surrey in 1931.
In 1933 he became a member of the Royal Institute of Oil Painters and also was a member of the Penwith Society of Arts in Cornwall and the Chelsea Arts Club. Fuller also exhibited his work at the Glasgow Institute; Liverpool; Manchester; Royal Society of Portrait Painters; Royal Cumbrian Academy; Royal Hibernian Academy and the Royal Institute of Oil Painters.

By 1938 he and Marjorie had moved to St. Ives Cornwall and Leonard at set up the St. Ives School of Painting. They lived at 3 Seagull House, The Wharf, St. Ives, Cornwall.