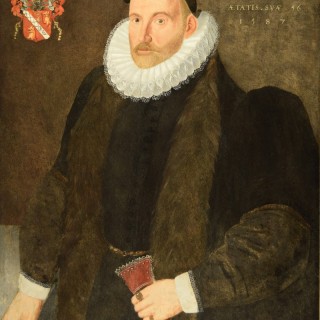 John Bettes II was the son of the portrait painter John Bettes I who died in 1570.
John II was a pupil of Nicholas Hilliard (1547-1619) and became a portrait and miniature artist and a painter-stainer. He lived in London on Grub Street in St Giles Cripplegate and some years later moved to the parish of St Gregory-by-St Pauls. John Bettes and his studio are thought to have painted a number of portraits of Elizabeth I.
On 1 December 1571 John marries and it is thought that his wife may have been Magdalen Browne of St Gregory’s parish. They had a son, Thomas who died in August 1593. A daughter Judith was born in July 1599.
After his first wife dies, he marries Ellianor Harman on 8 September 1614.
John II died on 18 January 1616 and was buried in London. He bequeathed his son (John Bettes III) a picture of John Bettes the Elder, two easels, and a porphyry slab and muller for grinding pigments.

This is a very rare, monogrammed work by the artist.
The sitter is Richard Waugh Esq who was a City merchant and was aged 56 when this portrait was painted.