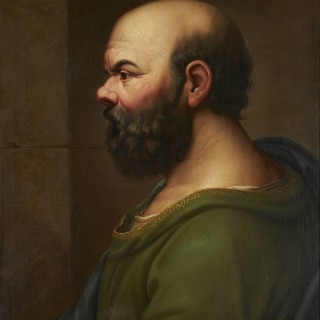 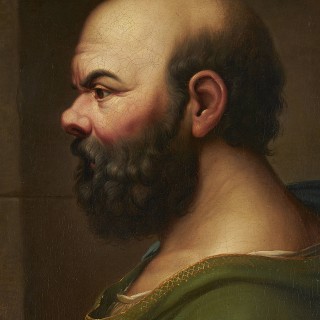 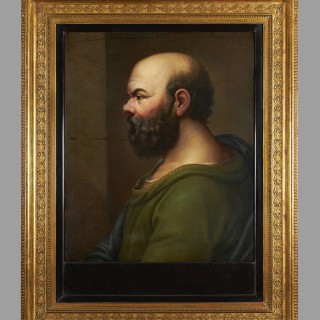 This bust-length portrait of the ancient Greek philosopher, Socrates, is a fine example of Neoclassical painting from the late eighteenth century.

The composition is clearly inspired by the figure of Socrates in Raphael’s fresco of the School of Athens (1509-11), in the Stanza della Segnatura in the Apostolic Palace of the Vatican, which also shows the philosopher in left-side profile wearing a green tunic.

Rather than being a slavish copy of the School of Athens, however, the present portrait creatively departs from Raphael’s original in a number of respects. Firstly, the shape of the rounded head of Socrates is somewhat different to that in Raphael’s fresco, where it is elongated and more stylised. Secondly, the beard is shorter and thicker, in a rather more realistic manner than the long curling beard of Raphael’s philosopher. Finally, the all’antica dress of Socrates in the present portrait seems to be more studied in its attempts to depict classical drapery, whereas Raphael’s Socrates wears a cloak which could have been worn by a contemporary Renaissance painter or intellectual.

Raphael’s classicism, along with antique sculpture, were amongst the most fertile sources of inspiration for the Neoclassical movement in Rome in the second half of the eighteenth century. As Hugh Honour describes, the German artist Anton Raphael Mengs (1728-79), one of the earliest and most influential Neoclassical painters, sought to ‘recreate a dream of classical perfection by a synthesis of antique sculpture and Raphael’s paintings’. Indeed, in 1749 Mengs himself painted a full-size copy of the School of Athens for the Duke of Northumberland (Victoria & Albert Museum, London, P.36-1926), whilst several engravings were made after Mengs’s drawings. This demonstrates that Raphael’s frescoes were being keenly observed and studied by Mengs and his followers during this period.

The present portrait, therefore, must have been executed by a talented young Neoclassical follower of Mengs, who was also in close contact with the more austere, scholarly classicism being explored by David and other French artists studying in Rome in the 1770s. It was either commissioned by a patron who admired Socrates, or executed by an artist who had a love of ancient Greek philosophy himself and wanted to emulate Raphael’s famous depiction of Socrates, but this time alone and apart from the rest of the School of Athens, in an intense and original portrait study.

We are grateful to Dr Steffi Roettgen for her assistance in cataloguing this painting.

[Please note, we offer free delivery of this item within London and the Home Counties. We can provide quotes for shipping elsewhere in the UK and overseas]