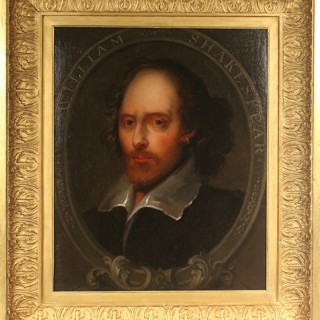 Portrait of William Shakespeare
(Early 18th century) British School
Oil on canvas. 22 ½ x 18 ½ in. Frame:28x 24 in. Period decorative gilt and gesso acanthus leaf frame. Circa 1730
After his death, as Shakespeare’s reputation grew, artists created portraits and narrative paintings depicting him, most of which were based on earlier images, but some of which were purely imaginative.
This well executed portrait of William Shakespeare (1554-1616) was painted after his death, circa 1730. The work can be considered a good representation of the playwright, as it appears to be based upon the earlier ‘Chesterfield’ and ‘Chandos’ portraits of the playwright.
The Chesterfield portrait of Shakespeare is one a few representations of the playwright painted within his living memory. Thought to have been rendered by the Dutch painter Pieter Borsselaer, the portrait is named after the Earl of Chesterfield, who formerly owned the painting. It was acquired by the Shakespeare Birthplace Trust in 1967. It is perhaps the most Baroque of all paintings of Shakespeare; his head is clearly modelled on the Chandos portrait including the characteristic earring.
The Chandos portrait, dated about 1610 and attributed to John Taylor is the most famous of the Shakespeare portraits, the only painting with any real claim to have been done from life and now in the collection of the National Portrait Gallery. It is named after the Dukes of Chandos, who formerly owned the painting.
Gallery Note: The standard spelling of the surname as “Shakespeare” was the most common published form in Shakespeare’s lifetime. The spelling o was later modernised to “Shakespear” in the 18th century, and replaced by “Shakspeare” from the late 18th through the early 19th century.