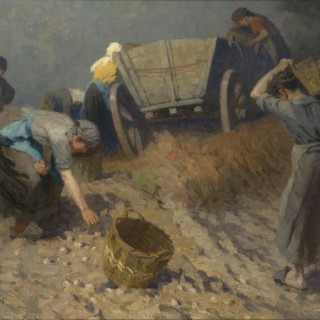 A strong and beautifully constructed painting by a German artist working at the turn of the 19th/20th century. This large canvas bears a relationship to French and British genre paintings of the 1890 – 1910 period artists working under the influence of Jean François Millet (1814 – 1875) and concentrating on the themes of peasant workers and the dignity of labour on the land. This painting is very comparable to the work of two French painters contemporary to Frost, Julien Dupré (1851 – 1910) and Léon A.L’Hermitte (1844 – 1925), but it is available at a much more accessible figure than these artists command.

The painting bears an original exhibition label which indicates that it was shown in Berlin in 1912.