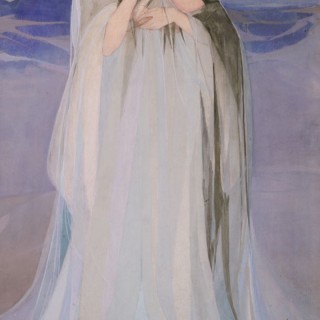 Signed with monogram; signed, inscribed with title and the artist’s address and dated 1899 on a label on the backboard
Watercolour and bodycolour

Robert Traill Rose was the grandson of the Scottish geologist Alexander Rose. He was born in Newcastle upon Tyne and studied at Edinburgh College of Art. He exhibited at the Royal Scottish Academy and Royal Scottish Society of Painters in Watercolours as well at in London and provincial galleries. Influenced by William Morris and Walter Crane, Rose worked mainly as a book illustrator. In the 1890s he contributed Celtic designs to books published by Patrick Geddes & Colleagues. Among his other works were The Book of Job (1902); Omar Khayyam (1908); Edinburgh Vignettes, and Children’s Dante (1908). The National Gallery of Scotland has several of his drawings for illustrations, including work prepared in the form of pen drawings for The Book of Job, which was published in Edinburgh in a limited edition in 1902. His Symbolist watercolour The White Peace, or, The Garden of Memory (c.1900-5) is in the collection of the City of Edinburgh Museums and Galleries. He was a member of the Scottish Society of Artists. Having been deaf from childhood; work on munitions during World War I caused a serious breakdown in his health; be began to lose his sight in 1925 and was blind by 1933. He died in Edinburgh in 1942.