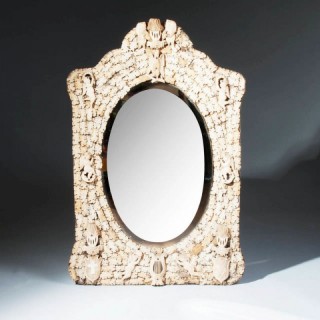 Dieppe is a coastal town on the north eastern coast of France, north of Rouen in Normandy and facing the English Channel. For centuries Dieppe was the main port of import for thousands of tonnes of ivory. With the ivory import built up a community of ivory workers attracted from all over Europe.

Dieppe was also an important military prison, maintained by the British during the Napoleonic wars. Thousands of captured French naval and military were secured there, all in need of things to do. The prisons were used through the nineteenth century and in the mid 19th century work such as this mirror was created.

Convicts were encouraged to make decorative ivory boxes, figures, military related sculptures and decorative furniture such as this Dieppe mirror and other furniture to occupy their time in a productive manner. The output of their labour was sold in the Friday prison markets.

A fine Dieppe ivory / bone mirror, the bevelled mirror plate of oval shape with overlapping slices of engraved ivory and bone, with musical cherubs, knights in armour and flags.