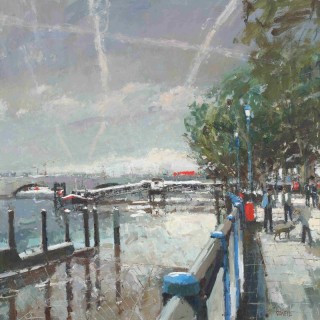 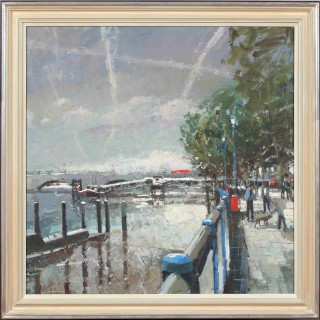 Robert is a Yorkshire born artist specialising in city and landscape paintings around London and the North Yorkshire Moors. Most of his smaller works are painted directly from the subject and at all times of the year in all weather.

Robert moved to London in 1988 to study for a Masters Degree in The Illustration and Rendering of Architectural Spaces at London University. Prior to that he had studied at Batley Art College and worked for several years as an architectural illustrator.

He is a member of the Royal Society of British Artists and a Fellow of the Chartered Society of Designers (FCSD).

Robert has a fine reputation as one of Britain’s leading representational painters of our urban environment. Through his series of London scenes, in a distinctively British impressionist style, he is now as familiar at the Mall Galleries annual shows as Ken Howard or Peter Brown. The work is layered with texture, painted in a subtle, almost monochromatic palette, that has become his trademark. It is this tonal range that so perfectly captures the London we all recognise on a winter’s day. Robert has a knack for conveying our sense the place – the damp chill of the city in the rain and the excitement and daily bustle of life in the Capital. Robert’s London is one we know and love well, not merely because we recognise the landmarks of our daily commute but rather that he captures our lived experience of it so perfectly.