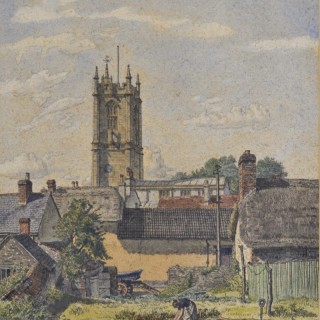 Signed, inscribed Cerne Abbas and dated 1939
Pen and ink and watercolour over traces of pencil

Cerne Abbas, Dorset was a favourite holiday retreat for Schwabe and his family and friends. In the summer of 1939 they stayed at Abbey Farm where they had also spent the previous summer. War broke out during their stay and in his diaries he recorded the arrival of 150 evacuated children into the village.