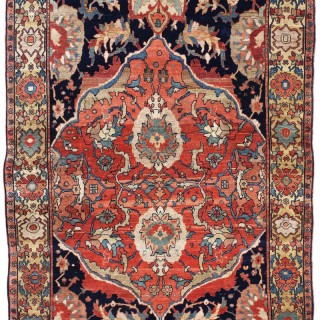 An exquisite design on this rare early antique Fereghan rug from Malayer region in Western Central Persia woven around 1860-1870, possibly earlier.  A larger palmette design with two cloud band motifs in the main centre of this rug, the border is also an earlier design less cluttered and intricate than the turn of the 20th century examples.  The dyes are just remarkable with deep indigo blues and a variety of reds, yellows and greens that make these rugs famous.  The condition is fantastic with only minimal lower areas of pile.  The weave is very fine and such a decorative early rug would work in many rooms.  One of our favourite rare early rugs in our inventory and this will be exhibited at the upcoming BADA Antiques Fair on 20th March in Chelsea, London.

Fereghan carpets are unlike their neighbours Sarouk which are more formal often using an elaborate central medallion. Fereghan weavers preferred floral motifs of shrubs and vines using more green dyes and hints of yellow.  Fereghan or Ferahan rugs were woven in the Arak district which was once the capital of Persia.  They wove a variety of designs with Sarouk-Fereghan rugs more classical in their structure and rugs from Malayer and Fereghan using palmettes, shrubs, geometric motifs.

We offer the service of viewing any of our carpets & rugs in-situ in London, Surrey, Hampshire and all over the UK & Europe by appointment. Please contact us by email or request a home visit to see this early antique Fereghan rug in situ.

In very good original condition with small areas of wear. This rug is at least 150 years old, for this age it is quite remarkable how good a condition it is in. No areas of significant damage or restoration.