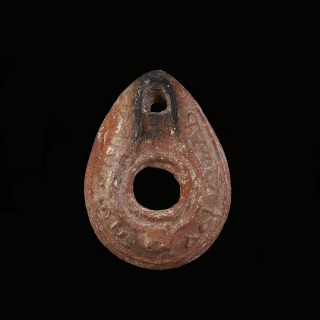 A rare early Islamic terracotta oil lamp with a small chipped handle, featuring an oval body, pointed towards the nozzle, sitting on a raised ring foot. The shoulders have been inscribed in early Syriac, or early Arabic text, surrounding a large filling hole with a pronounced rim. An interesting aspect of this particular oil lamp, which distinguishes it from the others, is the inscription on the shoulders. This is relatively a rare feature, which is not commonly seen in similar early Islamic oil lamp examples.

Fine, chipped handle, black deposits on the nozzle where the wick was fired, light erosion of the terracotta due to ageing and some lime encrustations on the surface.