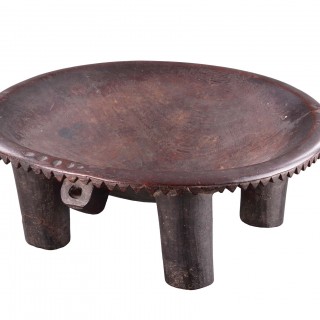 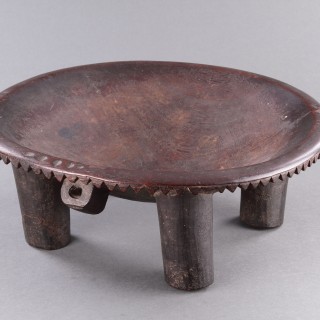 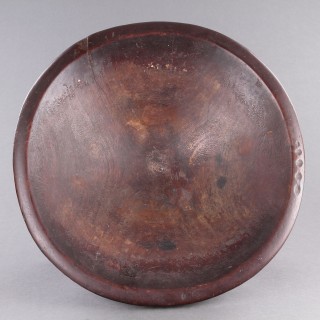 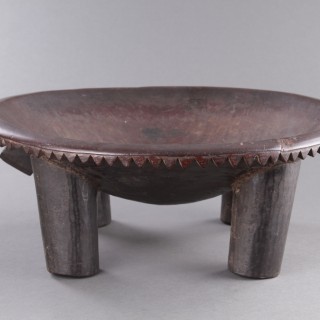 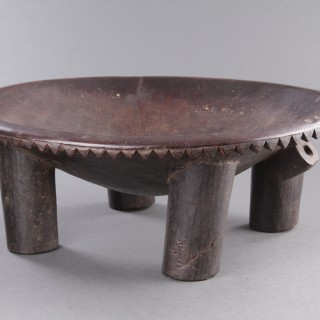 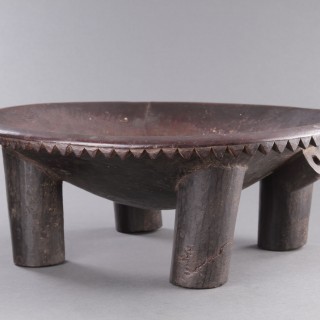 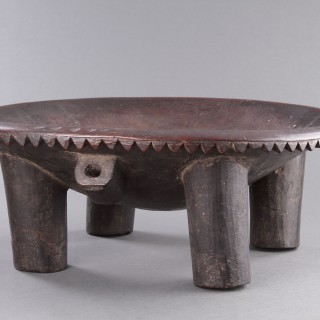 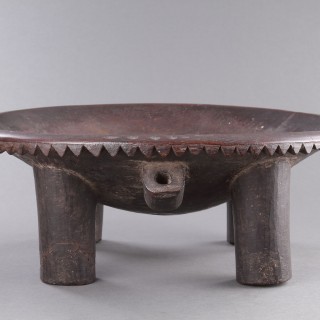 cf: Similar skirting can be seen on several Priests Dishes and Four Yaqona mixing strainers in the Cambridge University Museum of Archaeology and Anthropology

The saw tooth skirting together a remarkable blackened patina to the underside of this ‘tānoa’ or ‘kunete’ bowl points to a religious use in ritual Fijian Yaqona rites associated with invoking ancestor spirits. The saw toothed ‘tavatava’ skirting can be seen on some examples of chief’s whale ivory or whalebone breast plates, earrings and broad-bladed wooden clubs. It is highly significant as this decoration is also used on priest’s oil dishes and directly links this bowl to a ritual use in invoking ancestor spirits. The chosen spirit was offered and drank the yaqona liquid through the medium of the priest whom it possessed for the occasion. The bowl or ‘tānoa’ was used for mixing the intoxicating liquid presided over by the spiritually possessed priest ‘bete’ who would then drink the first cup drawn from the bowl on the ancestor spirits’ behalf. The bowl was one of the sacred ritual objects kept in the spirit house and dedicated to a particular ‘kalou’ or ancestor-spirit. The smoke blackened patina indicates that the bowl was hung bottom outermost from the wall of the spirit house ‘burekalou’ in which a smouldering fire was constantly kept burning in the hearth.

Shortly before the arrival of Captain Cook in Tonga in the 1770’s, carpenters from Manono in Samoa came to eastern Fiji to produce plank built voyaging canoes from the readily available stands of Vesi wood. These carpenters also became renowned for their superb ‘kumete’ or ‘tānoa’ bowls which were distributed by exchange throughout the region. The large bowls cut from a single block of sacred Vesi wood were used for the ritual brewing and drinking of a concoction made by the infusion of chewed wads of kava or yaqona pepperbush root ‘piper methysticum’ in water, and although the origins of making this intoxicating liquid are pre-contact in date, the ceremonial chiefly rituals and Tongan style of kava preparation which became widespread in Fiji, date from the late 18th century.