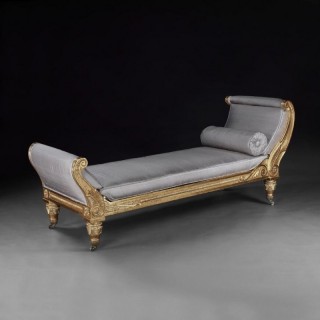 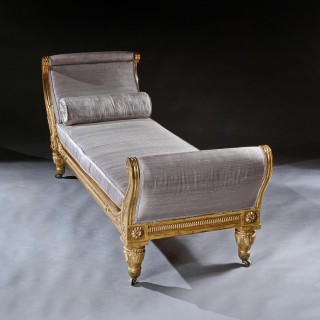 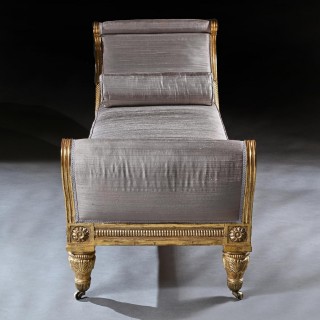 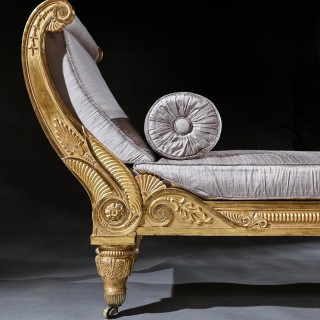 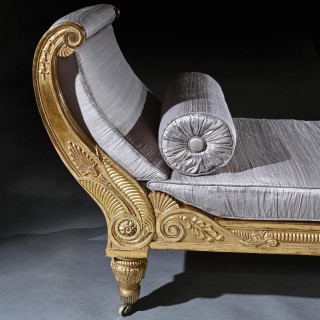 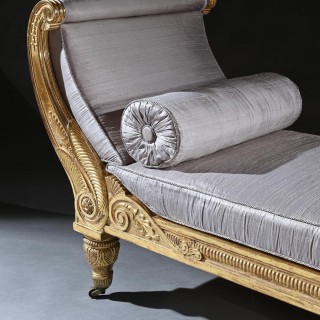 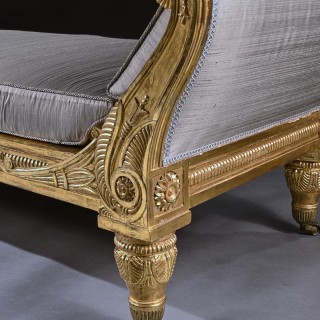 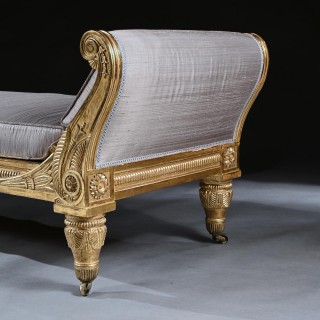 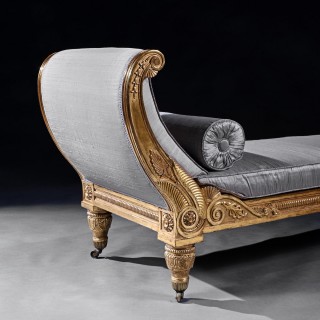 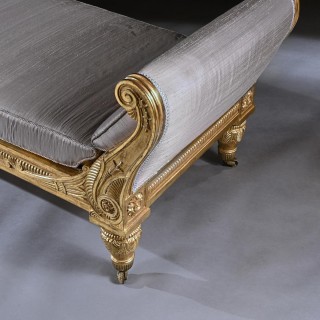 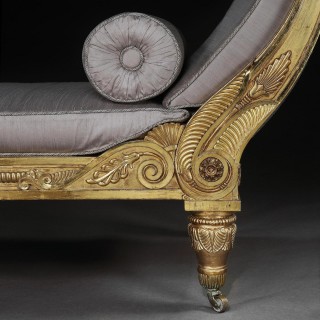 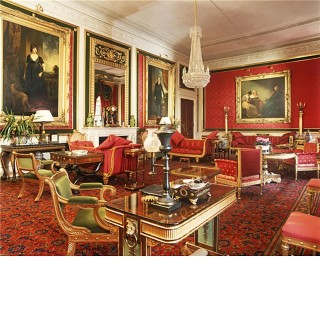 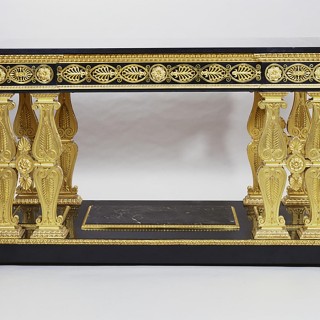 An extremely rare and elegant Grecian giltwood daybed from the Regency period after Nicholas Morel and Robert Hughes.

The cushioned seat within padded and giltwood scrolled ends, the headrest being of greater height, the giltwood carved frame with leaf, husk, harebells and patera-carved facings over a gadrooned rail on palmette-carved baluster legs finishing on reeded cups and castors.

Retaining all of its original upholstery and bolster which have been traditionally reshaped and covered with a silk upholstery and fine matching piping. Some areas of original gilt work where retained whilst the rest carefully matched.

This important and rare giltwood daybed was designed to add both style and comfort to highly fashionable, furnished interiors. With its timeless elegance, it will provide a stylish and comfortable statement piece in any contemporary home.

The likes of the Royal Palaces and Important Houses have very similar quality and designed giltwood pieces in their collection, for more information please read below…

This elegant daybed is stylistically after the work of Nicholas Morel & Robert Hughes with the distinctive dense and finely wrought surface decoration. Nicholas Morel by 1827, had partnered with George Seddon, both partnerships enjoyed huge commercial success and were awarded some of the finest furnishing commissions in the first quarter of the nineteenth century. Their designs are marked by a distinctly Francophile ‘antique’ flavour thanks to the designs of Morel who was of French extraction and enjoyed the patronage of George IV as both Prince Regent and King.

The earliest documented mention of Morel is in a bill for the furnishing of the Prince Regent’s residence, Carlton House in 1795 and he also worked on Brighton Pavilion. In partnership, Morel and Hughes furnished some of finest aristocratic houses in England, including Harewood House, Kenwood, Southill, Weston Park and Northumberland House. In 1828 Morel was granted the royal warrant as Upholsterer in Ordinary to George IV, almost certainly due to being commissioned to provide furnishings for Windsor Castle along with his new partner George Seddon. Morel, Hughes and Seddon were held in the highest regard as furnishers of this period and their workshops produced quality, fashionable furnishings much sought after by the highest echelons of regency society.

Classical designs, like this ‘couch’ or ‘Grecian squab’ were extremely fashionable in the first quarter of the nineteenth century. In 1803 designer Thomas Sheraton (1751-1806) published a design for a ‘Grecian Squab’ or Classical couch in The Cabinet Dictionary (vol. II, pl. 50), an influential source for furniture makers and their clients. Certain motifs from the daybed are particularly noticeable in a chaise longue pattern in George Smith’s Collection for Household Furniture and Interior Decoration, 1808, (pl.65), notably the scrolling palm leaves and the turned, reeded legs. Smith, who advertised himself as Upholder to George IV when Prince of Wales, noted that such seats were ‘admissible in Drawing Rooms, Boudoirs, Parlours or Dressing Rooms’.

The distinctive palm motif is featured in the palm-wrapped drawing room suite which Morel provided for Samuel Whitbread II’s home of Southill (see ‘Regency Furniture 1795-1820’ Margaret Jourdain, p.44-45, rev.ed.1965). In an image of the drawing room furniture www.countrylifeimages.co.uk (CL 28/04/1994 Image No. 517918) the motif can clearly be seen gracing the legs and sides of a pair of gilt chairs.

The palm (anthemion) motif and paterae feature on the distinctive legs and frieze on a pier table made by Morel & Seddon from the Crimson Drawing Room at Windsor Castle (RCIN 2595) www.rct.uk/collection/search/46/collection/2595/pier-table.

Features such as the palmettes, paterae and gadroon pattern can also be seen on a Bergère chair at the Victoria & Albert Museum (Acc. No. W.48:1, 2-1979) made by Morel & Hughes for the Duke of Northumberland’s London home, Northumberland House in 1823. The bill dated 31st March 1823 (Northumberland Archives UI 64) lists ‘2 bergeres, from the antique…richly carved and gilt with ornamented trusses, foliage leaves, scroll sides and c. the tablet back…standing on brass socket castors’…to covering the seats, backs & tablets of the bergeres with grey silk, lined with calico, and finished with silk gimps, and cord in suit’. The two bergères (and six side chairs from the suite) were sold from the collection of David Style at Wateringbury Place (Christie’s, 1st June 1978). The V&A acquired one bergère and the remaining bergère was acquired by Towneley Hall Art Gallery, Burnley. Other pieces from the suite remain in the collection of the Duke of Northumberland. The design is based on antique Greek forms but the decoration comes from more recent French Empire designs, reflecting Morel’s fashionable French influence.

Retaining all of its original upholstery and bolster which have been traditionally reshaped and covered with a silk upholstery and fine matching piping. Some areas of original gilt work where retained whilst the rest carefully matched.