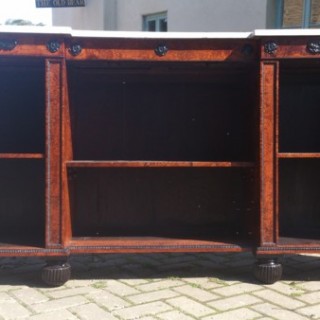 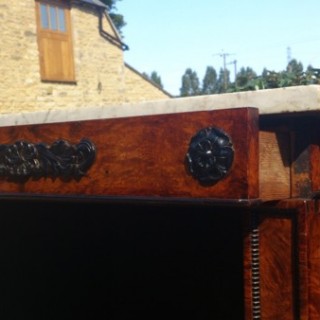 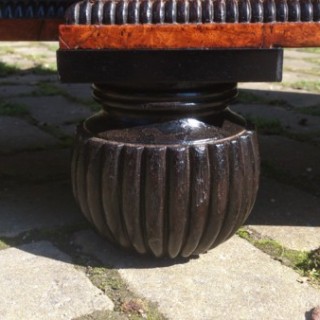 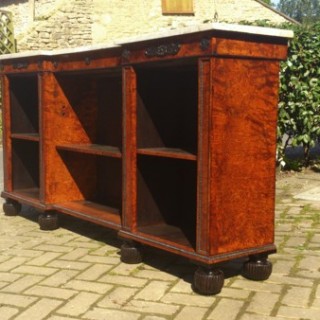 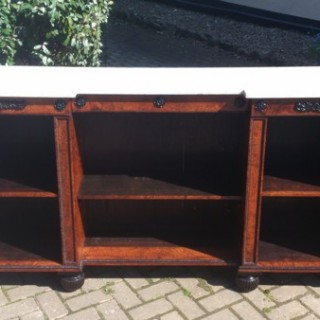 Burr walnut breakfront bookcase with repaired marble top and ebony decoration and gadrooning, the whole standing on six bun feet, the shape and decoration typical of George Bullock, the construction of this piece is typical of Gillows, but no stamp that we can see, it can take more shelves using the existing typical adjustable system, English circa 1820

George Bullock (1777-1818) was a cabinetmaker appearing to have worked both in London and Liverpool. There is little record of his early career other than a superb wax, depicting a figure seated in an interior in the collection of Leeds Art Galleries. This depicts Henry Blundell of Ince and is signed ‘G. Bullock 1801’.
In 1804 Bullock showed at the Royal Academy a marble bust of Blundell, which is now in the Walker Art Gallery, Liverpool.
By 1815, he was established as ‘Sculptor, 4 Tenterden Street, Hanover Square, Mona Marble and Furniture Works, Oxford Street’. These were his premises until his death on 1 May 1818.
Bullock used a wide range of exotic woods and marbles in his furniture designs. Later in his career however he made a particular virtue of using native British woods and marbles. There were strong commercial and patriotic reasons for this during the Napoleonic wars, but interestingly a similar move towards native woods also took place in France. In a geological lecture in Liverpool a Mr. Bakewell described Mona marble as ‘a beautiful Green Stone which is found in part of the island of Angelsea the property of Mr. George Bullock’. Bullock also used Scottish marbles.
Bullock’s furniture was far more assertive in its character than was usual in his day, and the ornament both in the form of its finely modelled bronze mounts and the Boulle and marquetry of various woods and metals is highly stylised and dramatic. His use of native woods and marbles was often commented upon:
While most of his furniture was Neo-Classical in style, some was Gothic, Elizabethan and Jacobean and he developed these styles far beyond other designers of his day. How much he designed himself is unknown as no records of his firm survive beyond a book of designs for furniture, interiors and metalwork entitled ‘Tracings by Thomas Wilkinson from the designs of the late George Bullock 1820’. (Birmingham Museum and Art Gallery).

Makers Bibliography:
Coleridge, A , ‘The Work of George Bullock, Cabinet-Maker in Scotland’, The Connoisseur, April 1965, pp. 249-52
Edwards, R George Bullock as a sculptor and modeler.
Glenn, V ‘Regency Furnishing Schemes’, Journal of the Furniture History Society, 1979, pp. 54-67.’
‘British Oak Furniture’, Times, 1 July 1819.
The name Gillows has been associated with the craft of furniture-making since the reign of George II. Gillows furniture is prized for its well chosen timbers and fine quality of craftsmanship. Furniture produced in the latter part of the eighteenth century shows a prediliection for elegant forms, while finely figured mahogany and robust design characterize furniture of the early nineteenth century. The history of Gillows, from the early eighteenth century to the early twentieth, encapsulates the history of English furniture and its manufacture.
Gillows was established around 1730 by Robert Gillow some 20 years before Thomas Chippendale, and was one of the most renowned British cabinet making firms. They developed first a national and then an international reputation as a supplier of quality furniture to the upper middle classes, the landed gentry, and the aristocracy. The company won commissions to furnish and decorate public buildings in Australia, South Africa, India, Russia, Germany, France and the U.S., and it also executed Pugin s designs for London s Palace of Westminster from 1840 onwards.
If Gillows is less of a household name than Chippendale, Sheraton or Hepplewhite, it is because the firm kept its pattern books, the Estimate Sketch Books, a closely guarded secret, for craftsmen and customers only. They boasted the widest stock outside London, and, uniquely for a provincial company in the eighteenth century, had workshops and showrooms in the capital on Oxford Street.
They often worked in conjunction with other cabinet making firms on large domestic furnishing commissions, such as Denton Hall, Otley where they worked alongside Thomas Chippendale during the late 1770’s, and Wokington Hall, Cumbria, from which examples of the furniture are at the Abbot Hall Museum, Kendal.
In the nineteenth Century Gillows were involved in several celebrated projects, most notably the furnishing of the Palace of Westminster throughout the 1850’s and 1860’s, for which they worked from Pugin designs; and the ‘Pet Sideboard’ to designs by the ubiquitous Bruce Talbert which won first prize at the London Exhibition of 1872. This sideboard was bought by the Victoria & Albert Museum, and is illustrated in Simon Jervis ‘Victorian Furniture’, p.59, pl63.
Gillow of Lancaster, also reputedly invented the Davenport for a Captain Davenport in the 1790’s.
Makers Bibliography:
Burkett, M and others, A History of Gillows of Lancaster.
Coleridge A., ‘The firm of Gillow & Co. at Blair Castle’, Conn,1964, 88-93.
Whitehead M., ‘The Gillows and their work in Georgian Lancaster’ in Catholic Englishmen, ed. J.A. Hilton, 1984.
Simon Jervis, Victorian Furniture, 1968.