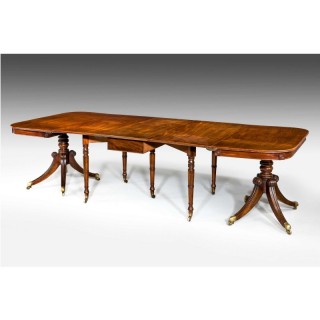 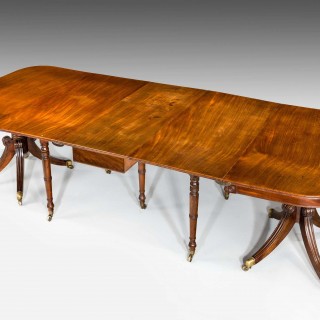 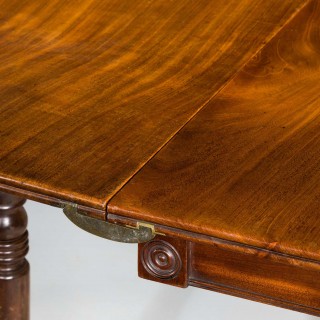 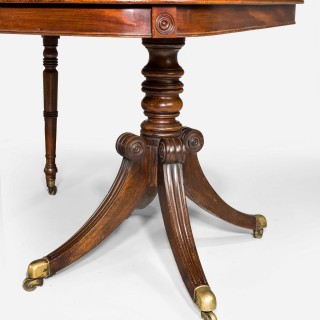 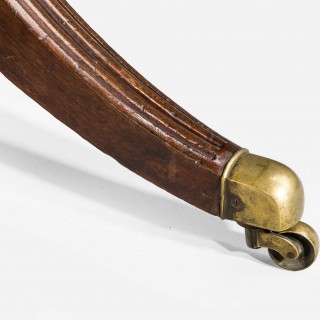 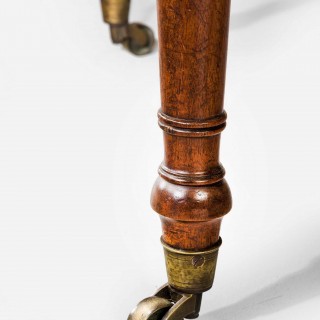 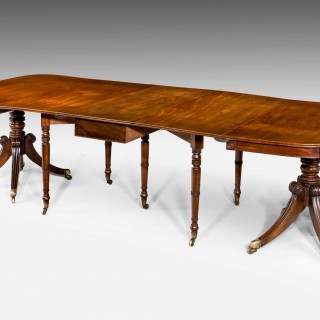 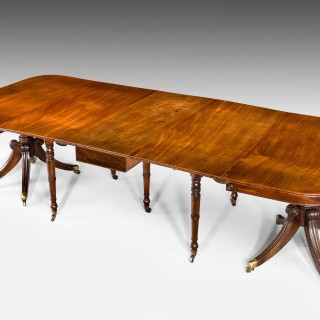 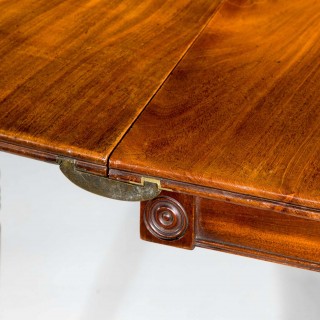 A fine and rare Regency period mahogany three part dining table of wonderful golden color and in entirely original condition, the table can be used for just six persons if required as the drop in centre can be used quite separately or as it’s shown in the images extending to ten to 12 persons, the table has quite small proportions with outstanding configuring.

The price of dining tables, Richard Gillow wrote in 1786, depended on the quality of wood, more than any other furniture – as these may be made of inferior kind of mahogany with slip hinges bolts, brass fasteners £1.00 5ft. long, but if made of fine hard mahogany they would come to about 12 guineas’.’ Again in 1788 Gillows wrote similar comments about the importance of dining tables made in the ‘completest manner’ of fine hard mahogany’, as opposed to those made of inferior soft mahogany or baywood (Honduras mahogany).’ Gillows stressed the importance of using well-seasoned wood, particularly for dining table tops in order to prevent them warping. Their timber, they wrote, stands well as the tops are fine old mahogany that have been sawn up nearly 5 years ago will improve in use. Most 18th century dining tables were designed as sets of smaller tables, some of which could be placed against the wall, or a pier between the windows, when not in use, and reassembled to suit the number of people dining. In modest houses without a card or drawing room they were also reassembled after dining by servants for different purposes, such as card playing. In 1796 Gillows advised customers on the size of the table in relationship to the dining room. All dining tables should be 7 feet shorter than the room they are for to leave room at each end for a chair and a servant to pass. The length of a table depended, of course, on the number of people expected to dine, and Gillows’ customers sought advice on the amount of space to allow per guest. In the 19th century Gillows & Co calculated 24in should be allowed per person but added 22 inches is frequent made to do but rather crowded, but 21in they thought insufficient. The width of the table was also carefully calculated to allow for factors such as space for dishes, candelabra and leg room. Naturally, the advice given depended on several factors, but Gillows did not approve of narrow dining tables nor apparently, what would be regarded today as standard measurements.