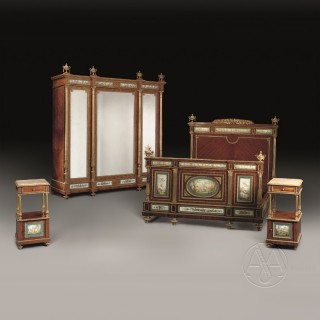 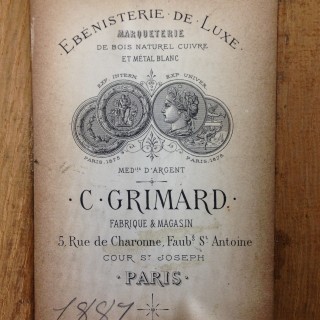 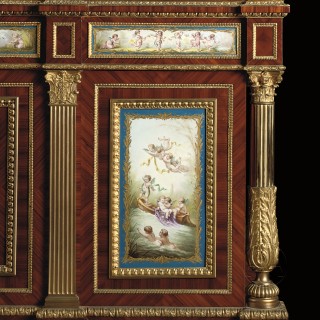 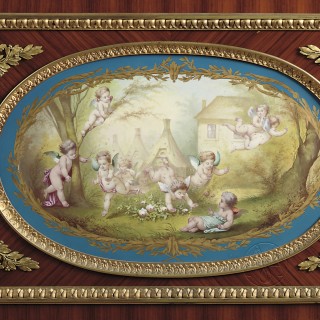 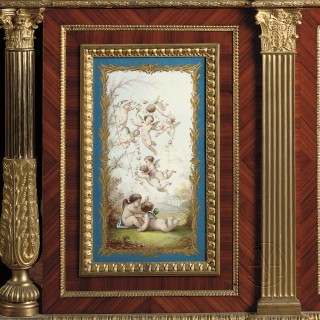 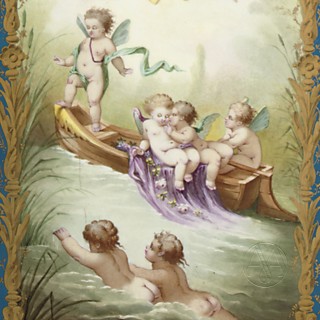 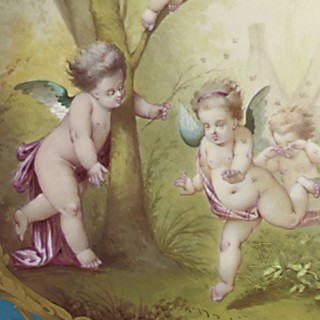 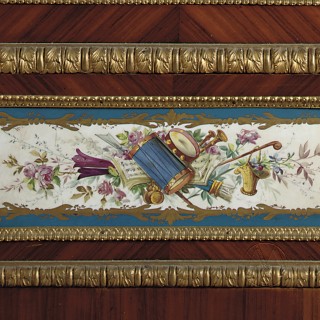 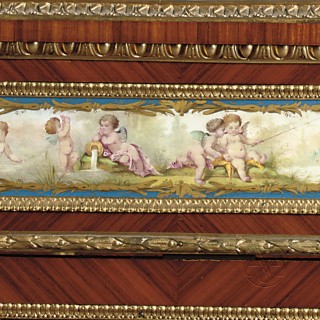 This very rare Napoléon III bedroom suite, by the important ébéniste de luxe G. Grimard, dates from 1887 and is of exceptional exhibition quality. It is mounted with large and very fine Paris porcelain panels depicting putti at play within pastoral surroundings and set within finely cast gilt-bronze bronze mounts.

This fine bedroom suite bears a remarkable original paper label for G. Grimard, behind the central porcelain plaque to the footboard of the bed. The label is further inscribed in pencil with the date ‘1887’.

The gilt-bronze mounted parcel gilt and Paris porcelain bed is surmounted at both ends by urn finials. The headboard, base and sides are mounted with extremely fine bronze borders containing painted porcelain panels depicting putti at play.

The gilt-bronze mounted parcel gilt and Paris porcelain mounted armoire is surmounted by four neo-classical finial urns. The breakfront pediment has panels depicting playing putti and the front is centred by a bevelled mirrored cupboard door. The interior is fitted for adjustable shelves and is flanked to each side by a smaller similar door and interior. These are flanked on either side by a fluted column with a Corinthian capital, above a breakfront plinth with panels depicting ribbon-tied flower garlands and musical instruments. The armoire stands on gadrooned feet.

Maison Grimard
G. Grimard is recorded to have produced fine ‘Meubles d’Art’, from premises at 5 rue de Charonne, Paris, in the second half of the nineteenth century.

Grimard exhibited at many of the major international exhibitions of the period with great distinction. His work is comparatively rare but always of the very highest quality. Much of his recorded work is in the Louis XVI and neo-classical style often incorporating vernis martin panels.

The fashion for porcelain, mounted onto exquisite furniture pieces, was brought to the novelty seeking Parisian connoisseurs by ébénistes working for the principal marchand merciers around 1760. The original pioneer was Simon-Philippe Poirier, the celebrated marchand mercier, working chiefly with the ébéniste Martin Carlin, and who ordered his first plaques in 1758. These items were rare and sought after even at the time of their production, and most examples now reside in museum collections. The Nineteenth Century saw a revival for this fashion for porcelain-mounted furniture, especially amongst the English aristocracy (typifying their fascination with Ancien Regime opulence). Eighteenth Century plaques were often available to buy in the Nineteenth Century and many dealers would buy them and either alter existing pieces or make new ones to receive the plaques. The best known of these dealers were Edward Holmes Baldock, Nicolas Morel and Tatham in England, and in France, A.L. Bellanger, Vaché and Jules Piret.

The importance of the Parisian porcelain industry stretches back to the time when under the reign of Louis XIV, all silverware in France was melted into coins, and as a result all dishes needed to be replaced by a different material. This brought about an immediate demand for porcelain from China (the sole supplier of porcelain since Vasco De Gama brought the first porcelain objects back to Europe during the 15th century). This was a very expensive commodity, and as such the need to create local porcelain was paramount, and once it was made possible a thriving local industry built up. The area around the rue de Paradis has been Paris’s showcase of porcelain and crystal since the Restoration, when the Comte d’Artois, later to become Charles X, and his son, the Duc d’Angoulême the last Dauphin of France, were the first to set up porcelain workshops here, soon to be followed by many others.

Amongst the famous artists who at some time worked in the Parisian porcelain industry was Pierre Auguste Renoir who was apprenticed as a painter to a Paris porcelain-maker between 1854-1858.