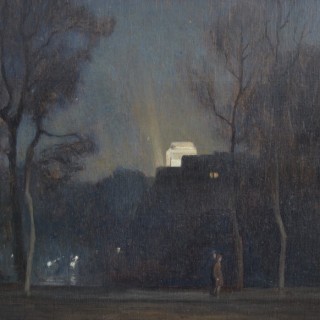 Signed l.r.; inscribed with title on a label on the reverse
Oil on panel

One of a number of works that show the strong influence of the nocturnes of James Abbott MacNeill Whistler on Rex Vicat Cole, the present painting looks through the dark, abstract forms of night-time in St James’s Park to the brightly lit beacon of 55 Broadway, the new London Underground headquarters, that had been finished a few years earlier in 1929. The work of the highly influential London Underground architect, Charles Holden, the building was awarded the RIBA London Architecture Medal in 1931 and was decorated with reliefs and sculptures by artists including Henry Moore, Eric Gill and Jacob Epstein.