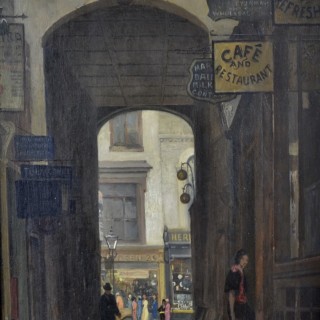 Signed l.l.; signed and inscribed with title on a label on the reverse
Oil on panel

The Georgian passageway, Rupert Court, is much the same today, its shops and bars having had various incarnations as part of Soho’s colourful nightlife and through being on the fringe of Chinatown. It was also immortalised in a famous photograph of The Beatles taken by Dezo Hoffman in 1963.