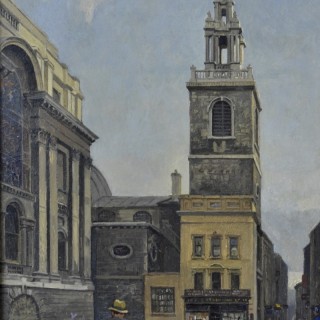 Christopher Wren’s church of St Stephen Walbrook sits close to the walls of the Mansion House. The original church, on the east bank of the Walbrook was destroyed in the Great Fire and the present church was constructed between 1672 and 1679. The dome is based on Wren’s original design for St Paul’s and is centered over a square of twelve columns. This contributes to what many consider to one of Wren’s finest church interiors. Sir Nikolaus Pevsner lists it as one of the ten most important buildings in England.