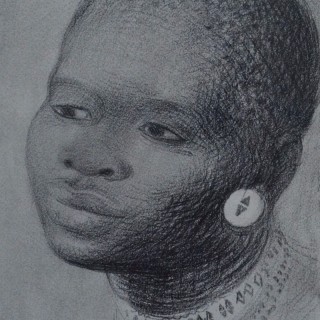 Provenance:
Acquired from the artist in South Africa c.1946, and thence by descent.

Pitchforth was born in Wakefield, North Yorkshire. He studied at Wakefield School of Art 1912–14, Leeds School of Art 1914–15 and 1919–20 (served in the Wakefield Battery, Royal Garrison Artillery 1915–19), and the Royal College of Art 1920–5, also visiting Paris. He was a member of the London Artists’ Association 1928–32 and the London Group from 1929. His first one-man exhibition at the London Artists’ Association was held in 1928 and thereafter he held further shows at the Lefevre, Redfern, Collings and Leicester galleries. He exhibited regularly at the Royal Academy from 1941, becoming a full member in 1953. A retrospective exhibition was held at Wakefield Art Gallery in 1943. During the Second World War he served as an Official War Artist and in 1945, attached to the Royal Navy, he was sent to record the naval campaigns to retake Burma and Ceylon. At the war’s end, Pitchforth acquired a lung infection and spent 1945-46 convalescing in South Africa before returning to London in 1948. From this period he took to working exclusively in watercolours. Visited Ceylon and Burma 1945 and worked in South Africa 1945–8, exhibiting at Cape Town, Durban and Johannesburg. An influential teacher, he taught at Camberwell from 1926, St Martin’s School of Art from 1930 and the Chelsea Polytechnic from 1948; also teaching for a time at Clapham 1926–39 and the Royal College of Art 1937–9. Works by him are in many public collections both in this country and abroad.