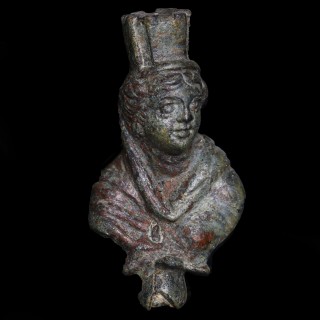 A finely modelled cast bronze applique in the shape of the Roman goddess Fortuna, known in Greek mythology as Tyche, goddess of good fortune, chance and civic pride. The deity is here portrayed demi-bust, with her head slightly turned left, wearing a mural-crown, chiton and peplos. Facial features are rendered in an extremely naturalistic manner. Bronze statuettes of Fortuna have been widely recovered across the Roman Empire, as a testimony of the goddess’ popularity during Roman Imperial time. Appliques, such as this fine example, would have been mounted on a piece of furniture or a jewellery box. It was the custom for the Ancient Romans, especially the wealthy, to have highly decorated everyday life objects, such as jewellery boxes or toiletries tables.
In Roman mythology, Fortuna was the personification of good fortune and chance, but was also worshipped as the protector of cities, hence the mural-crown she is shown wearing, which symbolises the city the goddess is protecting. Fortuna, known as Tyche in Greek mythology, appears not only in bronze sculptures, but also on coins, stone reliefs, glass perfume bottles and stone sculptures. Bronze statuettes and appliques depicting Fortuna were created to commemorate a specific city. Considering the particular way in which the drapery folds around the figure’s face, this applique might find its iconographical prototype in the famous Hellenistic bronze statue Tyche of Antioch, sculpted by Eutychides in the early 3rd century BC. The statue, like most of Greek bronze statuary, is known thank to a Roman marble reproduction, now at the Vatican Museums in Rome. Reduced scale bronze copies of the Eutychides’ Tyche have been recovered throughout the late Roman and early Byzantine worlds.
Date: Late Roman, circa 3rd-6th century AD

Condition: Fine, complete and intact with signs of wear to the surface. The artefact has been mounted on a custom made stand ideal for display.